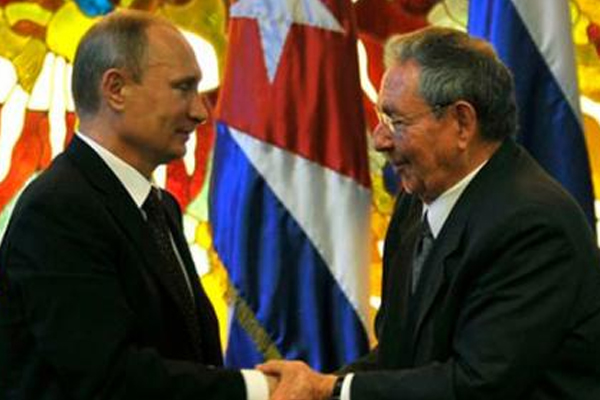 Havana, Cuba (ACN) — An increase in Russian cooperation with Cuba through large projects was announced in Havana on Friday by Russian president, Valdimir Putin.

“We have big projects to expand cooperation with Cuba in key areas such as energy, health and others,” Putin said, after signing ten agreements with the government of Cuba.

He referred to his government’s decision to write off 90 percent of the debt that Havana owed to Moscow since the days of the former Soviet Union, amounting to about $35 billion.

The other 10 percent will be used for Russian investments in Cuba, he added, and recalled that cooperation ties between his country and Cuba are scheduled through 2020.

This is due to an agreement adopted at the tenth meeting of the Intergovernmental Commission for Economic-Commercial and Scientific-Technical Cooperation, held in November 2012.

Speaking after the signing of the documents, Cuban president, Raul Castro, recalled that Cuban debt with Russia accumulated as a result of “the decisive help of the USSR.”

He expressed his gratitude for the decision “of the Russian people and government over the cancellation of most of the Cuban debt” and his confidence that ties between the two states will increase and strengthen hereafter.

The signing ceremony of the legal instruments on Friday between top officials of the two countries took place at the end of the official talks between Putin and Castro.

A cooperation agreement “on ensuring international information security”, was signed by Sergei Lavrov and Bruno Rodriguez, foreign ministers of both nations.

Six were memorandums of understanding adopted to cover the spheres of health, industry, disaster management and electric generation and lighting.

Veronica Skortsova and Roberto Morales, health ministers of the two countries, signed a memorandum on the protection of men’s health.

Representatives of the Cuban Electric Association and its Russian counterpart, INTER RAO-Export SL, signed three memorandums, one aimed at the construction in Cuba of four generation units with installed capacity of 200 megawatt per unit.

Also signed was another agreement for the production and application of LED lighting technology and one between the Rushydro Open Federal Company for Hydrogenation Inc. and the Cuban Electric Association.

The Cuban ministry of interior and the Russian ministry for civil defence, emergency situations and relief of disaster consequences made a memorandum aimed at the development of a Cuban-Russian regional rescue and firefighter training center official.

Putin and his delegation left on Friday afternoon for Argentina and on Sunday they will arrive in Brazil to participate in the BRICS (Brazil, Russia, India, China and South Africa) Summit on July 15 and 16.