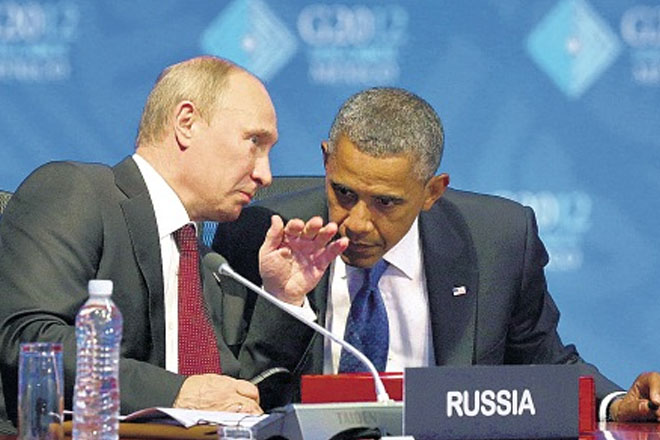 Putin to meet with Obama

Moscow (AP) — Vladimir Putin and Barack Obama will meet on Monday in New York — their first face-to-face encounter in nearly a year amid strongly troubled relations between Russian and the US, but one in which the leaders have different priorities.

Putin wants to focus on the Syria crisis, where Russia is taking an increasingly assertive posture, while Obama’s top issue is the conflict in Ukraine.

The announcement of the meeting was made Thursday by the Russian president’s spokesman, Dmitry Peskov, and confirmed by the White House.

Putin is speaking Monday at the UN General Assembly. Peskov said the meeting with Obama, expected to last about an hour, will take place afterward and will focus on the Syria crisis.

The conflict in Ukraine, the crux of Moscow-Washington tensions, could also be discussed, but only if time allows, Peskov said.

But White House spokesman Josh Earnest said Ukraine will be “the top item” for Obama.

Russia is ramping up its involvement in the Syria war, which has left 250,000 dead and forced millions to flee their homeland since it began in March 2011. Russia recently has ferried weapons, troops and supplies to an airport near the Syrian coastal city of Latakia in what the US sees as preparations for setting up an air base there.

Moscow has denied that it’s building up its presence there in order to protect its longtime ally, Syrian President Bashar Assad, saying instead it wants to help him fight the Islamic State group.

U.S.-Russian relations deteriorated significantly after Russia annexed the Crimean Peninsula from Ukraine in March 2014. The US, as well as other Western countries, imposed sanctions on Russia over the annexation and over claims that Moscow is supporting an insurgency in eastern Ukraine with troops and arms.