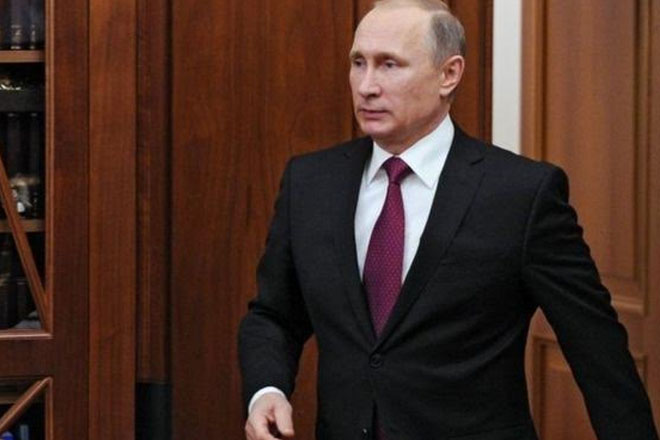 (BBC) President Vladimir Putin has ordered the Russian military to take “extremely tough” action against any threat to its forces in Syria.

Such targets must be “immediately destroyed”, he told defence officials in televised comments.

Mr Putin did not elaborate on specific threats but Turkey and Russia are currently locked in a dispute over the downing of a Russian jet by Ankara.

Turkey said the bomber had entered its airspace, something denied by Russia.

A Russian pilot was killed in the downing of the Su-24 bomber, as was a marine sent on a rescue mission, badly damaging the normally close ties between Ankara and Moscow.

Russia began air strikes in Syria in September, at the request of its ally President Bashar al-Assad.

In an update on Russian operations, Mr Putin said the military was now supporting Free Syrian Army (FSA) forces – which are fighting President Assad and have been bombed by Russia.

However, a Kremlin spokesman later appeared to contradict this, saying Russia was supplying weapons to “the legitimate authorities of the Syrian Arab Republic”.

The FSA has not responded to Mr Putin’s comments.

And a US official close to the US-led coalition against so-called Islamic State (IS) told the BBC: “We’ve seen no evidence that the Russians and the Free Syrian Army are working together. I think it’s just propaganda.”

The Kremlin has denied accusations by the US-led coalition operating in Syria it often targets moderate Syrian opposition, rather than IS militants.

Mr Putin also said it was important to develop co-operation “with all states who have a real interest in destroying the terrorists”.

That includes “contacts to ensure flight safety with the Israeli air force HQ and the US-led coalition forces,” he said.

In a separate development in Syria, at least 22 people are reported to have died in a triple truck bomb attack in a Kurdish-controlled town in northern Syria.

Syrian opposition politicians meeting in the Saudi capital Riyadh have also agreed a statement to guide peace talks with the government.