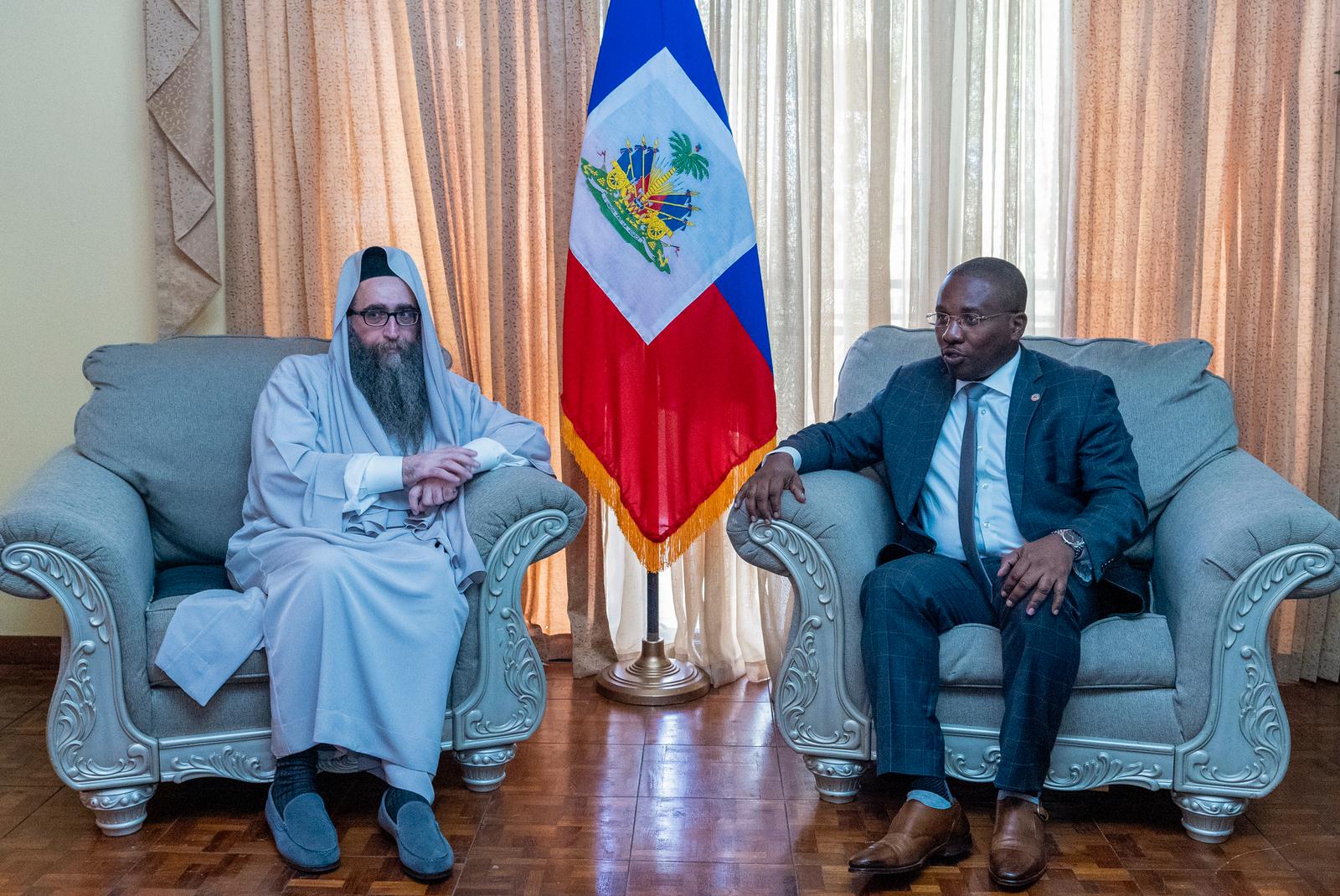 Rabbi Yoshiyahu Pinto, head of the Rabbinical Court of the Jewish community in Morocco, who is concluding a month-long inspirational trip to the United States, visited Haiti last week on a successful mission to promote interfaith dialogue and business cooperation.

The rabbi was accompanied by a number of leading Jewish businessmen and philanthropists from Los Angeles, Florida and New York and met with senior government officials and diplomats during his short trip to the Caribbean island of nearly 12 million people.

Upon arrival at the Toussaint Louverture International Airport, the rabbi was welcomed by Haiti’s Minister of Commerce Jonas Coffy, Minister of Tourism Myriam Jean and a number of elected officials. The representatives greeted the rabbi and his delegation and invited him into the president’s lounge at the airport.

The rabbi then met with Prime Minister Claude Joseph, who was appointed to the position a few days earlier following the resignation of former Prime Minister Joseph Jouthe, at his official residence in Port Au Prince. The prime minister also hosted an official dinner with cabinet ministers and members of parliament.

During his conversation with the prime minister, the rabbi reminded Joseph that Haiti was one of the few countries that opened its doors for Jewish refugees fleeing Germany during the Holocaust and thanked him on behalf of the Jewish people. The rabbi also pointed to the warm diplomatic relations between Haiti and Morocco, where he serves as chief rabbi.

Rabbi Pinto is well respected by all the Jewish religious movements and in the major Jewish communities worldwide. He is the founder of the Shuva Israel yeshiva, which has since grown to a network of yeshivas across Israel, the U.S. and Morocco, and leads a global charity organization.

During the trip, the Haitian government offered to build a synagogue and a Jewish community center for the relatively small Jewish community and for the many businessmen and tourists who frequently visit the island.

Flitchkin said that the honor and admiration the government demonstrated during the rabbi’s visit reflected Haiti’s respect of the Jewish religion and its desire to strengthen its Jewish population and promote business opportunities. He noted Haiti’s role in the establishment of the State of Israel. In 1947, Haiti was one of 48 countries at the United Nations who voted in favor of the partition plan that helped create the State of Israel, and prior to 1980, Haiti had its embassy in Jerusalem.

The following dignitaries visited the rabbi during his stay: Evens Souffrant, the country’s Minister of Religion; Beausoleil Sam, General Director of the Ministry of Foreign Affairs; Smith Augustin, Haiti’s Ambassador to the Republic Dominican; Haitian businessman Amos André, the founder of the political party Font Uni and a candidate for president in the November 2021 elections; and Lauture Jacques, Consul General of Haiti in New York.