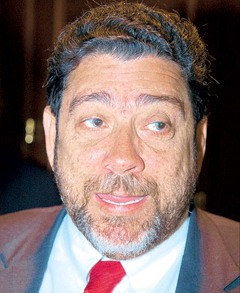 KINGSTOWN, St Vincent (CMC) — The manager of a St Vincent radio station which last year paid Prime Minister Ralph Gonsalves EC$206,000 for defamation, has apologised to him for a news item aired on the station on January 17.

“This information has no basis of truth. I have spoken to both broadcasters and they have asked to convey that they are truly sorry for their grave error,” De Freitas wrote.

De Freitas said that he apologised to Gonsalves on January 20, offered the apology on air, and will do so via local newspapers.

In a statement on Tuesday, LIAT said that the report was erroneous.

“These statements are reckless and mischievous. Such reports negatively impact the travelling public, our Caribbean community constituents, and the staff of our airline. LIAT distances itself from these unverified reports and remains committed to channelling our energies into our modernisation programme and to putting LIAT on a profitable footing,” acting CEO of LIAT, Julie Reifer-Jones, said in the statement.