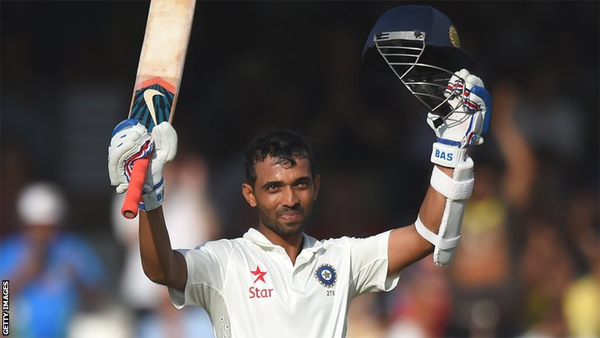 Sports Page — India will take sustenance from the fact that they have stared down a sinister Lord’s greentop and pronounced that they are a long way removed from the submissive outfit that lost 4-0 on their last tour to England. That they scrapped throughout was undeniable, but the dominant innings that finally rewarded a day of hard labours was not as much a stare-down as a display of dancing eyes and neat footwork, an exceptional counter-attacking hundred from Ajinkya Rahane that washed residual ill feeling from an engrossing opening to the second Test.

Rahane’s 103 came to grief 15 minutes before the close, courtesy of a nonchalant left-handed catch in his follow-through by James Anderson, an over in which Rahane had driven him confidently through the covers for his second Test hundred. No matter how fulfilling his career, he will not make too many better.

It felt like an appropriate end to a classically-paced innings, which was necessarily cautious as India, despite their best efforts, lost seven wickets for 145, but which then spread into a joyous second 50 at a run a ball as England’s pace quartet failed to make use of ideal fast-bowling conditions. Stuart Broad’s shake of the head and kick at the ball as India’s last pair saw out the day was an apt summation of England’s mood.

This was a most uncommon Lord’s day. The groundsman, Mick Hunt, unveiled one of the greenest Test pitches the famous old ground had ever witnessed, certainly since the invention of motor mowers, and loud boos broke out when Ravindra Jadeja walked out to the crease, a response to India’s insistence that Anderson’s alleged altercation with him in the first Test at Trent Bridge should be formally judged by the ICC

England, at one stage, would never have envisaged taking the second new ball. But they grabbed it with apprehension at 223 for 7. Bhuvneshwar Kumar’s solid support in an eighth-wicket stand of 90 in 24 overs ended when his stumps were spread-eagled in Broad’s first over, but by the time Rahane fell to Anderson, 20 balls from the close, India felt the more contented of the sides. England will hope to see the pitch become more straw-coloured under a hot sun and for the seam and swing they have pined for to disappear conveniently for a day or two.