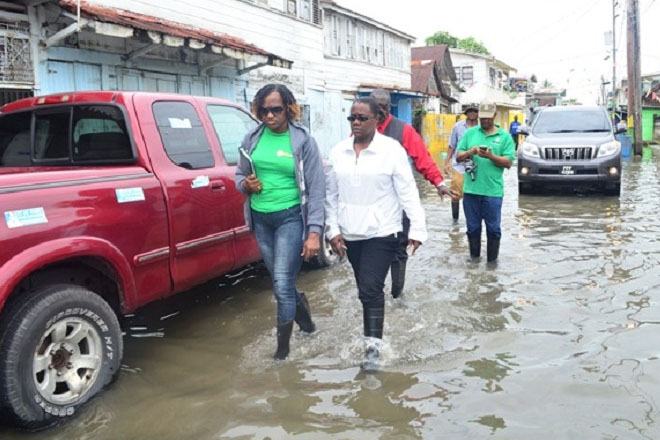 Georgetown, Guyana — Twenty-four hours of heavy rainfall resulted in extensive flooding in the capital and surrounding areas yesterday and residents are being told to expect even more, as more rain and thunderstorms are forecast for the next three days.

Officials have warned residents to take all the necessary precautions to ensure their lives and properties are secure.

This morning, even as the rains continued to threaten, people in the businesses and homes in the affected areas were mopping up and assessing the level of damage. Government announced that 25 public schools would remain closed today because of the flooding.

During a visit to affected areas yesterday, Minister within the Ministry of Public Infrastructure Annette Ferguson heard the complaints of residents who called for more frequent openings of the kokers, regular cleaning of canals and for authorities to ensure that drainage pumps were in proper working order, among the measures to prevent flooding in the future.

“We ask you to bear with us. We are the government and it is our duty to ensure that this problem be fixed, so come 2016, you won’t be faced with this type of situation,” Ferguson responded.

In the meantime, government has implemented some short-term solutions.

The city’s drainage system depends mainly on 13 sluices, of which 10 are fully functional. Six pumps are used to drain water off the land when the sluice gates are closed, but only one of them is functional.

Minister of Public Infrastructure David Patterson said yesterday evening that work would begin this morning on the three sluices that are out of operation.

The Force Account Unit has also been mandated to repair one of the four damaged pumps, while the National Drainage and Irrigation Authority will conduct conditional assessment on the remaining three pumps, with a view of having them repaired and functional within the next 24 to 36 hours.

In addition, Patterson said, the Ministry of Agriculture and the National Drainage and Irrigation Authority would make two other pumps availale.

Meantime, Minister Patterson said he would be making recommendation to Cabinet for the establishment of a multi-party taskforce, which would include civil society, to examine the drainage situation and the restoration of the city.