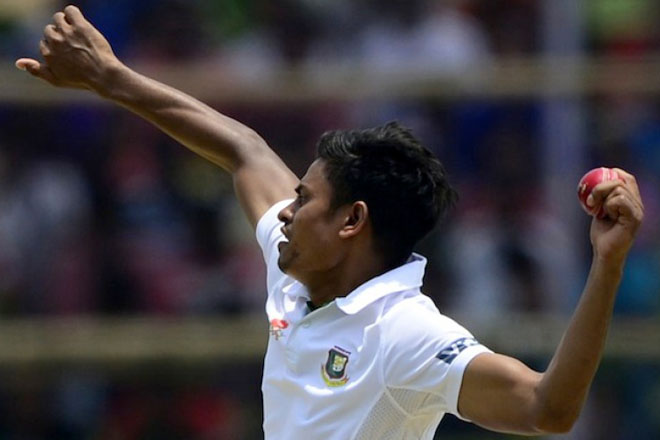 Sports Page — Left-arm spinner Taijul Islam ended with figures of 6 for 163 – his third Test five-for – as Pakistan lost their last five wickets for 34 runs, but the damage had already been done. Leading by 205 runs at the start of the day, Sarfraz Ahmed and Asad Shafiq extended that dominance with a 126-run stand for the sixth wicket. Both batsmen missed out on centuries but Pakistan’s total propped up to 628, their best against Bangladesh, and the lead to 296.

The prospect of surviving five sessions under a heavy deficit against a potent bowling attack would have forced most sides into a shell. Tamim Iqbal, however, kept all diffidence aside and launched a blistering attack on the bowlers and, along with Imrul Kayes, knocked off almost half of Pakistan’s lead in a session.

The four overs Bangladesh had played before lunch hid completely the approach they were going to take in the innings. Only six runs were scored after Tamim had narrowly survived an appeal for lbw off the first delivery from Junaid Khan. In the first over after lunch, though, Tamim carved the same bowler stylishly with a back-foot punch through backward point. In the next over from Wahab Riaz, Tamim picked up two consecutive boundaries with the pull shot.

If one thought it was a brief tactic to score quickly off the faster bowlers on a pitch that was still good for batting, before the arrival of spin, Tamim proved it wrong. He came out of the crease to the second ball bowled by Zulfiqar Babar but was lucky to mistime the lofted shot as it landed only couple of meters short of the fielder at deep midwicket.

That was the only time, however, that Tamim leaned towards danger while treading the fine line between aggression and recklessness. A classic cover drive off Yasir Shah in the next over brought up the 50 for Bangladesh, in 12.5 overs. The next 50 was even quicker; it came in 9.1 overs as Kayes joined in as well.