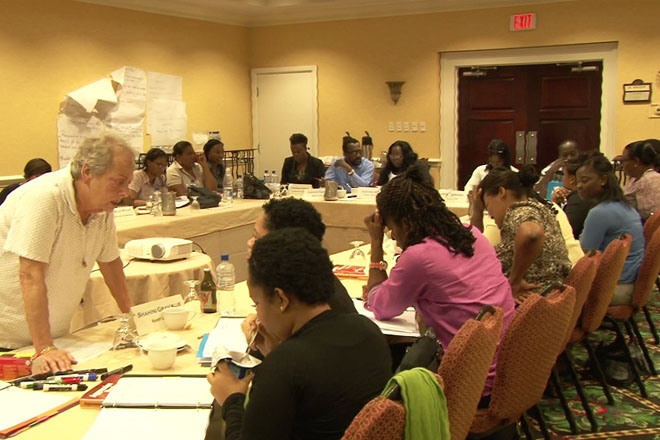 Regional Agencies better equipped to deal with at risk youth

“They learned to become group facilitators in which they will actually run three sessions per week in the programme,” said Dr. Glick. “Youngsters will come to groups once a week in each of the three components of the Aggression Replacement Training.”

He stated that within each component, youth will be divided into groups.

“They will come to one group where they will learn social skills; that is learning what to do in anger producing situations,” the OECS Consultant stated. “They will come to another group once a week for one hour where they will learn what not to do in an anger producing situation and to manage impulses. The third group will participate in a group discussion that is referred to as moral reasoning, in which the young people give their own opinions and perceptions about a problem situation where there is no right or wrong answer.”

He stressed that the purpose of the third group is to teach the young people how to view their world in a more fair and equitable manner.

Regina Apparicio, Welfare Officer from Antigua and Barbuda reflected on the components stating how she will utilize what was imparted.

“When I get back home, I intend to work along with the boys at our Boys Training School and engage in workshops to teach them the skills that I was able to learn,” Regina stated.

“Our job at NHRC is to rehabilitate the young people,” he said. “When they leave the institution, they should be able to be better people in society; therefore it is important for us to undergo such training.”

Dr. Glick stated that this is the first workshop in Aggression Replacement Training within the OECS and he hopes the programme will continue.

“We would want to train some of these staff that has been trained as group facilitators to trainers,” said Dr. Glick. “This should be done so that the OECS and member states can sustain the program and train staff themselves without having to hire external consultants.”

He mentioned the work done by the OECS and member states, stating that they need to be congratulated for the bold actions to “purposefully reform not only the Juvenile Justice System but the treatment of children and adolescence.”