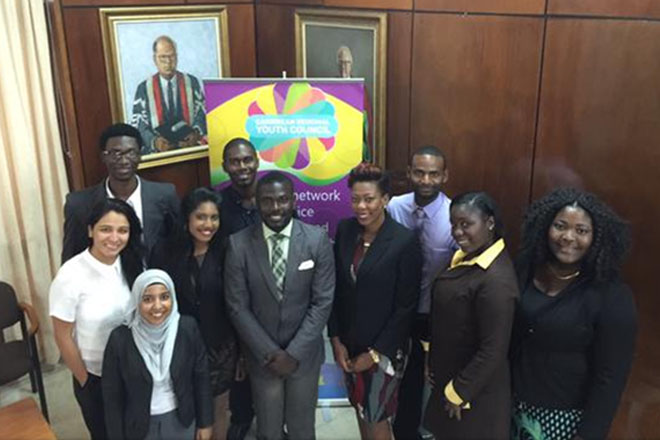 Castries, St Lucia — It was a significant week for youths of the Caribbean as they celebrated Caribbean Youth Day 2015 under the theme “Refocus, Reinvest, Reinforce. Youth Integration for a Stronger and Sustainable Caribbean”.

The Caribbean Regional Youth Council (CRYC) played a key role in these celebrations. The council partnered with the Sir Arthur Lewis Institute of Social and Economic Studies (SALISES) Youth Research Cluster “50/50 Youth” in hosting the SALISES Caribbean Youth Development Conference which produced opportunities for a number of young people to develop and present papers on a range of youth issues in the Caribbean. The Conference was held under the theme “Youth Post 2015: Directions for Sustainable Development in the Caribbean.”

The second general assembly of the Caribbean Regional Youth Council (CRYC) has also moved a step closer in making its presence prominent in the region through hosting simultaneous sessions virtually and accommodating six of its eleven members on the University of the West Indies (UWI) Mona Campus, Jamaica. On September 28th and 29th, 2015, the former executive as well as the present executive deliberated on the way forward.

This was definitely a positive strategy in young people inhabiting the use of technology to reduce cost and create opportunities for the participation to be more accessible and readily available. With the headquarters of CRYC being stationed in St Lucia, former chairman Timothy Ferdinand highlighted the necessity for a virtual presence of the organizations and the importance of reaching youths at the grassroots level.

Despite the numerous challenges such as administration/finance, leadership functionality, membership, organizational constraints and external support, the members agreed on several strategies in countering these issues that ranged from formalizing relationships with the Caribbean Community (CARICOM) to tapping into the strengths of an advisory board.

CRYC also decided on the action plans and urgent areas to be assessed during the 2015/17 period which included making provision for the non-English speaking countries within the Caribbean, strengthening the National Youth Councils within the region as well as providing documentation on ways youth councils can be created and sustained.

The council placed great emphasis on the archiving of documents and research that would better inform policy and program decisions. It made a significant leap in this expanse when they signed a memorandum of understanding on October 2 between SALISES 50/50 Youth Cluster that has ‘advancing youth participatory research on Caribbean development issues’ as their ultimate goal.

Chair-elect of CRYC Tijani Christian, in his reflections on the conference, emphasized the point, “Youth do not need charity, we need opportunities; therefore the youth sector should not be treated or viewed as an expense, but rather it is an investment.”

He also stated that consultations should not be seen as a formality but rather a necessity.

The keynote address delivered by Mario Michel, Justice of Appeal of the Eastern Caribbean Supreme Court, at the conference highlighted ten lessons learnt from his journey and experience at all levels of governance from the 1970s to present through his involvement in the St Lucia National Youth Council, which helped shape the man he is at present.

In his points he noted that National Youth Councils should consist of youth democratically formulated and financially supported to undertake their programs. Importantly, he explained that the council can contribute to producing a cadre of confident citizens that plays a vital role to the nation. Additionally youths should be seen as assets in development rather than liabilities or issues that need solving.

The culture of succession planning was developed to be implemented at the General Assembly between past and present executive members. The previous executive will demit office in December 2015 but will provide three months of support in the form of a transition period. This period commenced after the elections as of September 2015.

Ferdinand further suggested that successful succession planning depends on proper storage and passing on of history and best practices.

The establishment of CRYC came out of decisions made at three Caribbean Youth Leaders’ Summits between the periods 2011 to 2013, which recognized the need for a unified regional body to advocate for and advance the developmental agenda for youth.

It was voiced by all of the region’s youth leaders present, that there is a need to establish and sustain functional, democratic National Youth Councils in every Caribbean country to facilitate the development of youth, by serving as an essential engine not only for advancing the cause of youth development, but as a catalyst towards democracy, social transformation and effective governance. A regional youth council was recognized as the vehicle through which these could be achieved.