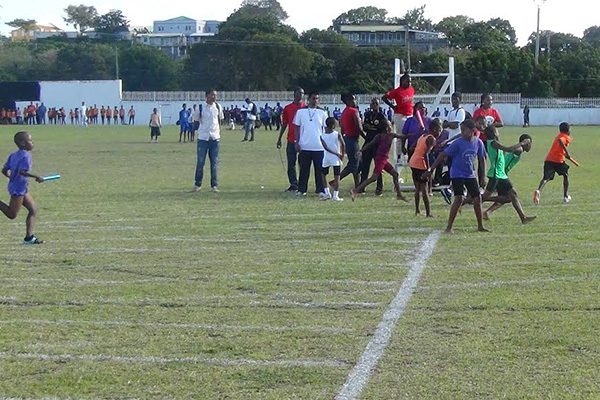 Sports Officer responsible for Athletics at the Nevis Sports Department, Shermon Caines has described the relay event which was held on Friday 31st January as a success.

For one, the crowd attendance was definitely pleasing and the athletes, who represented mainly the Primary and Secondary Schools on the island, were extremely competitive.

The event was held at the ET Willet Park and commenced with a brief but significant opening ceremony which was chaired by Ag Director of Sports, Mr. Jamir Claxton, who gave brief opening and welcoming remarks.

The feature address was delivered by Ms. Michelle Liburd Asst. Permanent Secretary in the Ministry of Social Development.

She challenged the children to give of their best as they would have been selected as the top athletes in their various schools.

She also assured her listeners of her Ministry’s continued commitment to the development of the young people on the island and noted that one of the key avenues is through sports.

The athletes then competed in various relay events including:

The crowd was certainly into the event and cheered loudly as their favourite athletes as  raced past.

There were no winning teams as it was indicated that the event really served to prepare the athletes for the athletic season and their upcoming sports meets and to assess how well they have been doing in training.