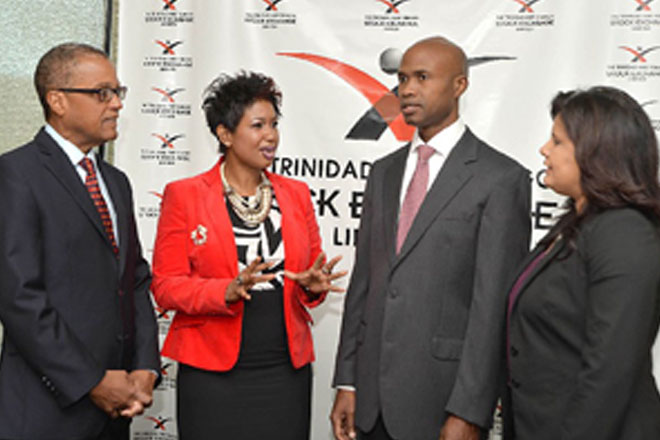 Port of Spain, Trinidad (Trinidad Express) — The Jamaica Money Market Brokers (JMMB) Ltd on Monday delisted its ordinary shares on all three of the regional stock exchanges on which they are listed and immediately relisted those shares under its new name, the JMMB Group Ltd.

The delisting and relisting took place on the Jamaica, Barbados and Trinidad and Tobago Stock Exchanges.

Carter said the renaming and relisting became necessary following the company’s acquisition of the Capital and Credit Financial Group (CCFG). In June 2012, JMMB acquired 93 per cent of CCFG in a Ja$4-billion takeover. The acquisition resulted in growth of its asset base to Ja$154 billion and its capital base to J$14.42 billion.

“The acquisition of CCFG gave JMMB a number of strategic capabilities including Capital and Credit Merchant Bank, now JMMB Merchant Bank, an entity licensed under the Financial Institutions Act (FIA) of Jamaica and therefore subject to the supervision of the Bank of Jamaica,” Carter said.

“In light of this, the combined group had to be restructured in a way that permits the Bank of Jamaica to effectively carry out its supervisory mandate under the FIA.”

“JMMB Group Ltd will now be the publicly listed and ultimate holding company of the combined group.”

Carter said the re-organisation was unanimously voted in favour of by shareholders and the Supreme Court of Judicature in Jamaica subsequently granted approval for the new scheme in November, 2014.

He added that shareholders would not be adversely affected.

“We have sought to ensure a win-win situation for our shareholders as JMMB Ltd ordinary shares will be transferred one for one for JMMB Group ordinary shares.”

This means shareholders will retain the same volume and value of their shares. The shares will also carry the same rights, benefits, and obligations of the previous JMMB Ltd ordinary shares.

Carter said the aim of the new group is to become an integrated financial services provider which delivers seamless solution-oriented services to clients.