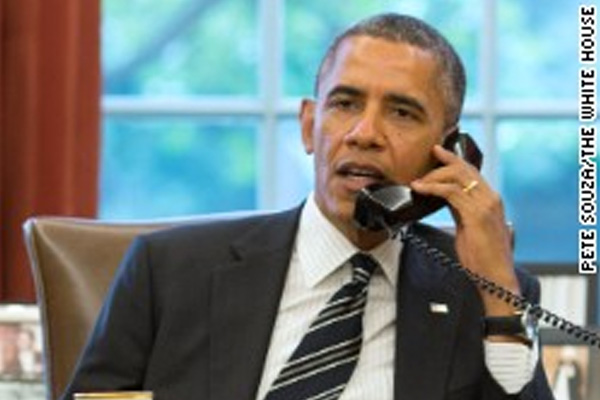 (CNN) The White House learned this summer that the National Security Agency had tapped the phones of world leaders and ordered a halt to some of the eavesdropping, The Wall Street Journal reported Sunday.

Quoting unidentified U.S. officials, the newspaper’s website said the wiretapping of about 35 foreign leaders was disclosed to the White House as part of a review of surveillance programs ordered by President Barack Obama after NSA contractor Edward Snowden leaked classified details of the NSA’s phone monitoring systems.

The White House ordered a halt to the monitoring of German Chancellor Angela Merkel and unspecified other leaders, the newspaper reported. The Journal report did not specify who gave the shutdown order or the date it was issued.

Responding to the report for the White House, National Security Council spokeswoman Caitlin Hayden did not directly address surveillance of foreign leaders. Instead, she described the ongoing review as “including when it comes to our closest foreign partners and allies.”

Merkel said last week that reports of American spying on her and other leaders had “severely shaken” relationships between the United States and European nations.

The German leader said she told Obama last week that eavesdropping among friends “is never acceptable.” The White House said at the time that Merkel’s communications were not being monitored — without saying whether she had been targeted in the past.

Should the president know wiretap details?

The officials quoted by The Wall Street Journal said it was understandable that Obama did not know about the phone tapping of Merkel and other leaders for nearly five years of his presidency because the NSA has so many eavesdropping programs, it would not have listed all of them for the president.

“The president doesn’t sign off on this stuff,” one official was quoted as saying. But the official said that policy was under review, the Journal reported.

Separately, the NSA on Sunday denied a report by the German newspaper Bild am Sonntag that NSA Director Keith Alexander told Obama about the surveillance of Merkel in 2010.

German intelligence officials are scheduled to meet with their American counterparts in Washington this week to ask about surveillance programs.

Other news media reports, based on documents leaked by Snowden, have said the NSA monitored the communications of the leaders of Brazil and Mexico.

Germany and Brazil are drafting a United Nations resolution on privacy in electronic communication, officials in those countries said last week.

The Spanish newspaper El Mundo reported Monday that the NSA collected data from 60 million phone calls in Spain in one 30-day period.

One of the authors of the El Mundo article was Glenn Greenwald, the journalist who first reported on documents supplied by Snowden for the British newspaper The Guardian.

The El Mundo article cited what it said was an NSA report titled, “Spain — last 30 days.” The 60 million calls were not recorded, but the NSA collected serial numbers of devices, phone numbers, locations and durations of calls, the newspaper said.

Even before the latest report, the Spanish government had summoned U.S. Ambassador James Costos to a meeting scheduled Monday in Madrid. That followed a report by another Spanish newspaper, El Pais, quoting unnamed sources as saying the NSA spied on Spanish officials and politicians.

The French daily newspaper Le Monde reported last week on claims that the NSA intercepted more than 70 million phone calls in France in 30 days. That report did not specify whether the calls were recorded or whether the interceptions were limited to data about calls.