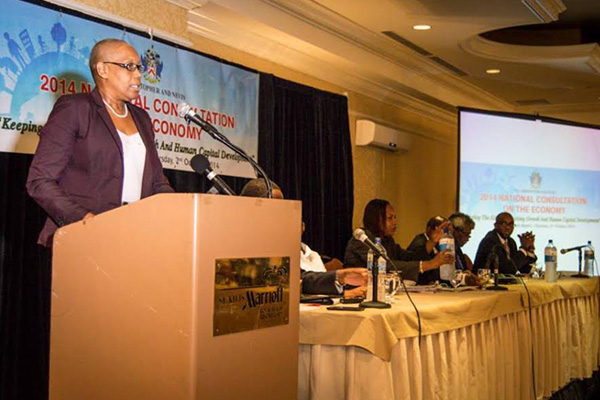 Residents made ready for the new Progressive SKN

Basseterre, St. Kitts (SKNIS) — Preparing people to take advantage of expanding opportunities in the new St. Kitts and Nevis was the overriding theme emphasized by Honourable Marcella Liburd in her presentation at this year’s National Consultation on the Economy.

As the Cabinet representative responsible for Health, Social Services and Culture, Minister Liburd made the link between the ability to address one’s health concerns and the impact on the economy. She noted that health costs are unsustainable both individually and collectively.

“It was Ban Ki-moon, UN Secretary General who made the observation that if the issue of health coverage is not addressed, more and more people will be plunged into poverty, and this would negatively affect the social and economic development of our countries,” Minister Liburd emphasized.

It was demonstrated that St. Kitts and Nevis was on the right path with the development of its own Universal Health Insurance coverage.

“I want to encourage all our people to be part of the movement toward Universal Health coverage, as we wage a war against Non Communicable Diseases (NCDs) that account for about 70 percent of our debts,” Minister Liburd stressed. “We would want to ensure that our people have proper coverage so that they can treat the diseases and the illnesses from which they suffer. … And so I want to encourage all of us to try and eat a healthy diet and engage in exercise on a regular basis.”

Minister Liburd also made mention of the expanding Hospital Information System (HIS), greater health security and expansion in areas like oncology, mental health and Magnetic Resonance Imaging (MRI). She applauded the Ministry of Education for its collaboration in introducing the Bachelor of Science degree in Nursing at the Clarence Fitzroy Bryant College (CFBC) in August this year. With a sense of ownership she noted that 16 had enrolled in the programme and the cost was being underwritten by the government.

Minister Liburd addressed three other areas in which the economy of St. Kitts and Nevis could continue to blossom if they were addressed in the appropriate way. The Cultural Industries and its promotion was seen as a means of energizing economic growth. The talent and creativity of the residents of the Federation was hightlighted as the Minister responsible for Culture chose to focus on the potential within the film industry. She mentioned two budding film producers Nigel Lewis and James Galloway who already produced one film pertaining to bullying and are currently working on another about breast cancer.

The importance of education was another key aspect in terms of preparing nationals for available opportunities. Minister Liburd congratulated the Minister and Ministry of Education for their ongoing work taking note that necessary reforms had already begun. TVET was promoted as a developer of skilled professionals and the work of the Information Technology Department was pin-pointed, particularly the fact that older persons and differently-abled persons were now included in specific programming. The Recongnizing Everyone’s Ability to Climb Higher (REACH) programme was also identified as another means of empowering nationals.

“When you look at all that is coming out economically … you would note that the involvement of women in a greater way would certainly add to our economic growth and human development,” Minister Liburd emphasized.

She explained that the laws had been amended to ensure that fathers were given the same rights as mothers particularly when it came to the payment of child support. It was noted that disparities included instances where child support still had to be paid to the mother even in instances when a child spent most of the time with a father who was providing all of their needs. Equality in terms of profession and income earned by males as opposed to females was also addressed. The People’s Employment Programme was highlighted as one means of providing employment opportunities for women in professions that were traditionally dominated by males.