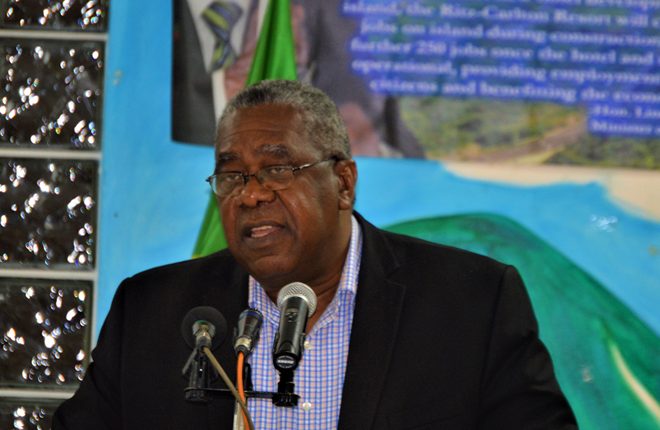 Residents of St. Kitts and Nevis to play a critical role in constitutional and electoral reforms

(Press Unit in the Office of the Prime Minister) – Attorney General, Senator the Honourable Vincent Byron Jr., has reiterated the Team Unity Government’s commitment to fulfilling the good governance legislative agenda as outlined in its manifesto and which it promised the people of St. Kitts and Nevis.

Speaking at the People’s Forum Town Hall Meeting in Sandy Point on Tuesday, March 6, Attorney General Byron noted that the process of constitutional reform has already commenced, evident by the tabling of the Constitution of St. Christopher and Nevis (Tenure of Office of Prime Minister) (Amendment) Bill 2018 in the National Assembly in February of this year.

“No longer will we have a prime minister who goes for 20 years. We say two terms and move on,” Senator Byron added. With the amendment to this Bill, a Representative shall not hold office as Prime Minister for more than two terms, whether or not served consecutively.

The Honourable Attorney General further stated that the Team Unity Administration also intends on introducing Freedom of Information and Data Privacy Legislation in the National Assembly this year.

As it relates to electoral reform, Senator Byron said, “We have had problems in this country of having an election that has been manipulated, where our voters’ register has been corrupted and we say in Team Unity that we will no longer have such, and so shortly we will be entering into a complete re-registration of the voters’ list – an enumeration so that we can clean up the voters’ list.”

According to the Attorney General, one of the fundamental issues affecting the electoral system in St. Kitts and Nevis has to do with persons registered to vote in areas where they do not reside.

“There have been people who live in one constituency and who are properly living there all their life, yet they go and they are placed in another constituency to register to vote to manipulate the system [and] to undermine our system of democracy. The voters’ list has been corrupted by that programme. There are others who may be properly registered in one community; they grew up there; they became adults there; they are properly registered and as they become mobile, might have gotten married and moved somewhere else [or] by a house somewhere else; they don’t move their names their either; they go back where they were to vote election time and that too affects our electoral system.”

Attorney General Byron disclosed that the government will seek to engage members of the public through forums such as town hall meetings and national discussions on several matters relating to electoral reform.

One such matter that will be put up for public consultation for the people of St. Kitts and Nevis to make a determination has to do with whether or not persons who reside overseas should be allowed to participate in the electoral process here at home.