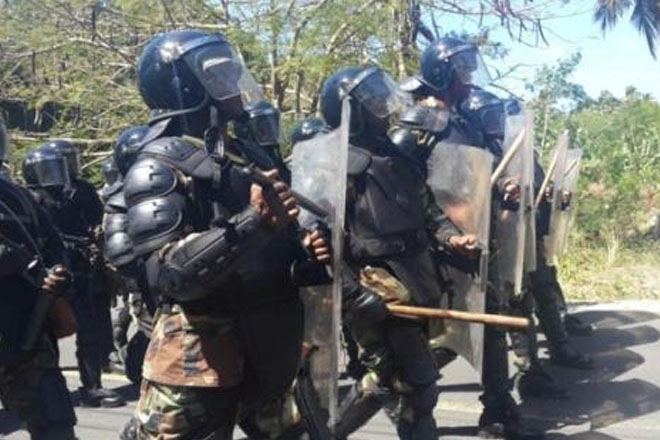 Roseau, Dominica – Another major protest erupted in the small community of Salisbury in Dominica on Thursday, blocking the main highway that connects the capital Roseau and Portsmouth. Police in full riot gear were called out to confront the protesters.

The main road was reportedly blocked in three places road with boulders and old appliances. It is alleged that shots were reportedly fired in the air as police moved towards protesters seeking to clear the streets.

One month ago residents of Salisbury, including local farmers held a major protest over what they claimed were the “deplorable” conditions of the community’s roads and a lack of attention by the government to the problem.

“The last time the prime minister was in Salisbury was on March 3 and said that he would be addressing the road situation in the community very soon but after two months nothing has been done,” said local member of parliament Hector John during the May protest.

The latest protest reportedly began as a result of the police attempting to arrest individuals who allegedly took part in the previous protest last month.

John said protesters were being attacked by police even though they were behaving in a peaceful manner.

There were unconfirmed reports of teargas being used against the protesters.