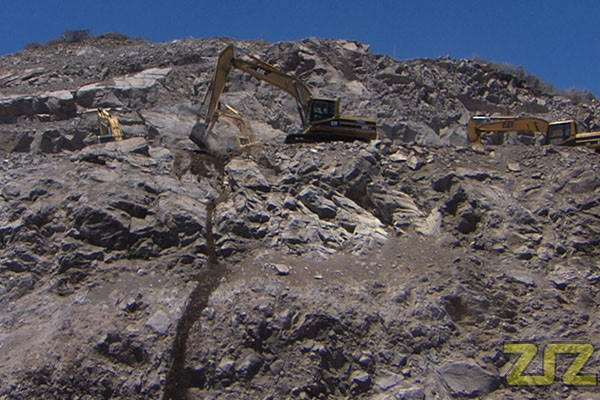 ZIZ News — A major road renovation initiative is continuing with a massive project at Timothy Hill that will not only provide a better driving experience, but also make the area safer for everyone.

The Ministry of Public Works and a consulting firm out of Jamaica have teamed up for the extensive project that includes addressing the hazard of falling rocks from the hillsides.

It’s a two part project… the first step is a process called benching where bulldozers and backhoes are cutting out a series of levelled areas, like steps.

Martell Lee, Managing Director of ADeB Consultants Limited said these would catch any falling rocks before they hit the road below.

“And if you happen to have a rock dislodged then it would fall on that levelled area and sits there or you can retrieve it or you can let it stay there and then you wouldn’t have that steep drop from the mountain to the road,” he said.

There are also plans to build a tunnel to protect vehicles. Lee said it’s a long term plan that is expected to last at least seventy five years.

“So if in another fifty years erosion is such that you do have rocks being dislodged it can roll down the mountain but it will then have a resting place above the roadway.”

Minister of Public Works, the Hon. Dr Earl Asim Martin said the government is committed to ensuring the safety of drivers and noted that the work at Timothy Hill isn’t the end of the project.

He said, “This is just one component of the rehabilitation and reconstruction of this highway. The other phases involve over at Cockleshell Bay, other phases at Major’s Bay and the whole comprehensive resurfacing and rehabilitation from that area right into Basseterre.”

The benching process is expected to take about another two months and then work begins on the tunnel.