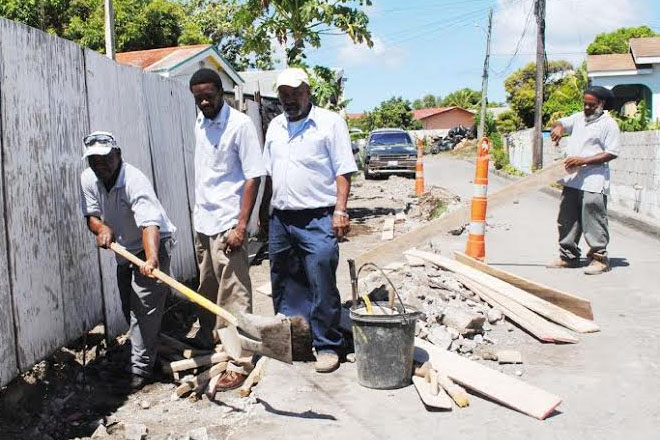 Basseterre, St. Kitts — The Roads Division of Public Works Department is coming in for high commendation from the People Employment Programme’s (PEP) Senior Field Officer, Mr Jason McKoy, for the efficient manner it has utilised three PEP workers attached to the division.

“Based on the experience persons would have acquired in the past, when they came to the PEP office seeking job attachments we were able to match them with suitable employers who would utilise their experience and continue to train them,” explained Mr McKoy.

“For those who did not have any experience we made efforts to find out what would be their areas of interest so that they could be trained. Based on that scenario, we were able to send three persons to the Roads Division of Public Works Department. Of the three, two had experience in the related field while one did not have prior experience.”

“Whenever I am on field visits, irrespective of the time of day, I always find these three workers well integrated with their colleagues and working hard,” explained Mr McKoy. “The Works Division has fully accepted them, including outfitting them in the department’s uniform. You cannot tell who is a PEP worker by just looking at them.”

Mr Calvin Powell, who joined PEP on March 1st, 2014, explained that after his interview by the PEP officials, he was sent to the Roads Division because he had years of experience in construction work, masonry and carpentry. He said that since he joined the division, he has been able to do many road assignments.

“PEP is very good, it provides people on the streets who are doing nothing with opportunity to learn something while they work,” said Mr Powell who was at the time with a group of colleagues fixing a road at Freeman Village in Central Basseterre.

“I think they should use their head and come on the PEP, you learn something and it will be better as it will put change in your pocket. PEP is helping the country when roads are repaired and people drive on good roads.”

Mr Powell’s supervisor, Foreman, Roads Division Mr Anthony Bergan said that he (Powell) works as a labourer attached to his crew. Other members of the crew are employed by government and Mr Powell interacts very well with them.

“I see that he is learning whatever new that is presented to him,” said Mr Bergan. “Given a chance to have him on my crew as full time employee, I think I would take him.”

A section of the Island Main Road was recently resurfaced at the Keys Ghaut by a crew made up of workers from the Road Division of the Public Works Department, under the supervision of Forman of Works, Mr Raimond ‘Smiley’ Browne.

For motorists, that is a very tricky section as it is characterised by a sharp and winding bend. During the course of the repairs two workers would be directing motorists from both ends in a methodical way, such that when those coming to Basseterre were shown the green sign to proceed, those going towards Cayon were shown a red sign to stop and wait. This would be alternated every few minutes.

Of the persons working on this crew were two PEP workers, Mr Thomas Simmonds and Mr Kevin Huggins. From the way they operated on that very busy day during the interview, and even in the way they dressed, you would only know they were PEP workers if they told you.

Mr Thomas Simmonds, who joined PEP in July 2014, had previously been exposed to roads construction when he worked for Public Works in Nevis. He also had a stint with Lagan Road Construction Company which did a section of the Island Main Road in Nevis from Market Shop in Gingerland to Cotton Ground via Charlestown.

“When I joined PEP, they brought me to my real destiny, my real work which I always enjoy being around asphalt – I am very experienced in it,” said Mr Simmonds. “Since I joined here I have learnt a little more. I am very happy working with Public Works because they are very concerned about the roads and that is the main agenda, paving roads, fixing roads, fixing drainage and so on.”

Mr Kevin Huggins has been with PEP for two years. He came with no experience and explained that he chose to come to the Roads Division of Public Works because he needed to be exposed to road maintenance work.

“I have been taught well because Mr Smiley (Foreman of Works Mr Browne) is a great boss, and he pushed me to learn,” said Mr Huggins. “I am very appreciative of the interest he had in me and the way he has pushed me. My work is making a lot of difference in the country, for the betterment of the roads and bus drivers and the other drivers.”

Foreman of Works gained the moniker “Smiley’ because he has a permanent smile on his face. He is also known for his role as a signer with the popular Grandmasters Band. He said that the two PEP workers attached to his crew make work easier because he is short-staffed.

“We are happy to have them, I wish it was permanent though,” said Mr Browne. “Everybody could learn: that is my motto, and it does not take rocket science to learn what we are doing here because it is all about you understanding what we do and you apply yourself and you could get it, and the interest to do the job is paramount.

“The PEP workers are surely interested in what they are doing because whenever we ask them to do anything they would diligently go and do it. If the government has the funds to employ them, I would gladly have them. If a private company wants to hire them, as long as they want to go, I would recommend them as I am satisfied that they won’t let me down.”