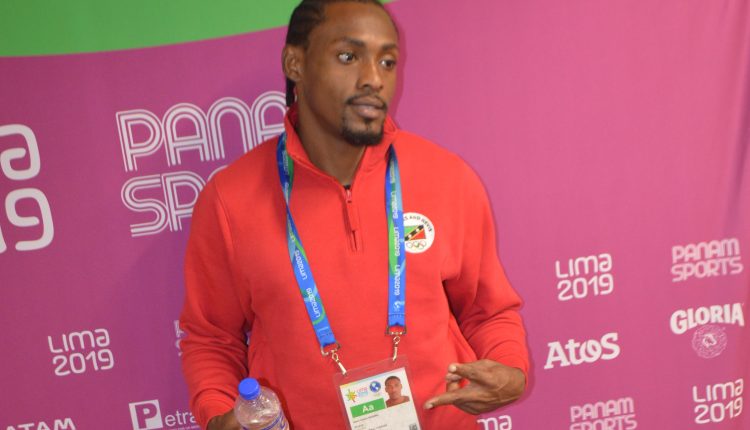 It was a valiant effort by Jason Rogers in the 100m finals at the Pan Am Games in Lima, Peru, but unfortunately he was unable to win a medal. Jason finished 7th with a time of 10.46 seconds behind -eventual winner Michael Rodgers from the USA who ran a time of 10.06 seconds. After the race, Jason said he tried his best to execute the race. “I tried my best to execute and put the race together but it just didn’t happen. I came up a very good field despite the circumstances. I am just thankful that I finished injury free. Thankful for all the support and just thankful for the opportunity to be here and represent the Federation,” Rogers said.

Considering this was his first competitive race coming off injury, making it to the finals is a major accomplishment. This event gave Jason an opportunity to see how his body reacts to competition after a lengthy absence. “In the past my first race would be like very slow but my body has responded very good for my first race out here because of the level of competition. Going forward, it’s a good look, despite the 7th place finish. It’s a good look for the future,” he said. Jason noted that it’s up to his coach to decide what’s next whether he will continue or shut it down for the rest of the season.

The silver medal went to Paulo André Camilo De Oliveira of Brazil with a time of 10.16 and Cehjae Greene of Antigua and Barbuda for the Bronze in a time of 10.23 seconds. St. Kitts and Nevis next competes in the Men’s High Jump with first time Pan American athlete Jermaine Francis on Friday. The event will be graced by the presence of Deputy Prime Minister and Minister of Sports the Hon. Shawn Richards, who is expected to arrive in Peru on Thursday.