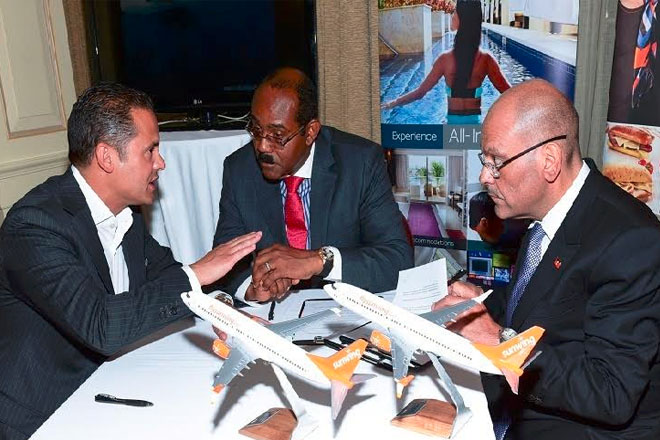 Royalton luxury resort coming to Antigua with thousands of jobs

St John’s, Antigua — A multi-million-dollar all-inclusive resort will open in Antigua in another two years, bringing with it 2,000 new jobs, government has disclosed.

The agreement for the development of the 500-room resort under the Royalton Luxury Resorts brand at Deep Bay was signed by representatives of the government and the Sunwing Travel Group.

Construction is expected to begin this summer on the Royalton Antigua Resort & Spa, as well as a residential complex with over 200 condominium units.

“Slated to open in 2017, this $400 million development is expected to represent 2,000 new jobs for Antigua and a massive injection to the economy,” the government said in a statement.

The signing of the partnership came as the Antigua and Barbuda Tourism Authority launched Caribbean Week in New York, the largest event on the Caribbean tourism calendar.

More than 180 people, including influential, top-tier leading media and travel trade and executives, attended the event that was also used to celebrate achievements of the past year, including the appointment of Special Economic Envoy Robert De Niro.

“With such a positive turnout of influentials and executives, who left with an infectious feeling of excitement and positivity about Antigua and Barbuda, and everything we are doing to achieve our vision of becoming the economic powerhouse of the Easter Caribbean, we fully expect this energy to proliferate across all networks – from tourism to business to investments,” said Minister of Tourism, Economic Development, Investment and Energy Asot Michael.

He added that the event was “an incredibly important step” for Antigua and Barbuda to reassert itself in the North American market as the destination of choice – from leisure to investment and business to the country’s Economic Citizenship Programme.