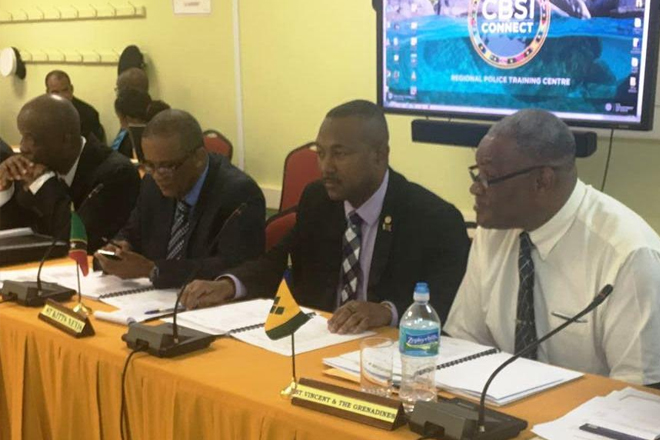 Over the weekend, Permanent Secretaries With Responsibility for National Security and Defence within the Member States attended The Regional Security System Quarterly Security Chiefs Meeting at the RSS Headquarters in Barbados.

Permanent Secretary in The Ministry Of National Security, Osmond Petty accompanied Commissioner Of Police Mr Ian Queeley And Lt. Colonel Patrick Wallace who were specifically invited to the meeting to get a better understanding of the functions and operations of the RSS.

“This particular meeting was essential from the point of view that it was attended by Permanent Secretaries of the member. This is the first time that the Permanent Secretaries and the Chiefs sat down together in a conference setting to discuss security matters that are pertinent to our region”, he said.

“The meeting is not just for the Chiefs to discuss. It is also for Chiefs to be exposed to new technologies which will be available to enhance security in the region”, Commander Wallace added.

He said among the topics addressed is finding resolutions to issues such as gang violence.

“The Security picture is identical or near identical to that of all others. For example, we’re all having the problem of youth gangs and for Member states like St. Kitts Nevis who have a problem with a high rate of Homicides among our young men, the Chiefs exchange ideas to overcome such issues”, he expressed.

Other topics discussed at the meeting included, The Current Security Environment, RSS Operations And Strategy Capacity Building Within The Member States And The Role Of Permanent Secretaries In National Security.

Presentations from external stakeholders including a University of the West Indies (UWI) presentation on succession planning were also on the agenda.