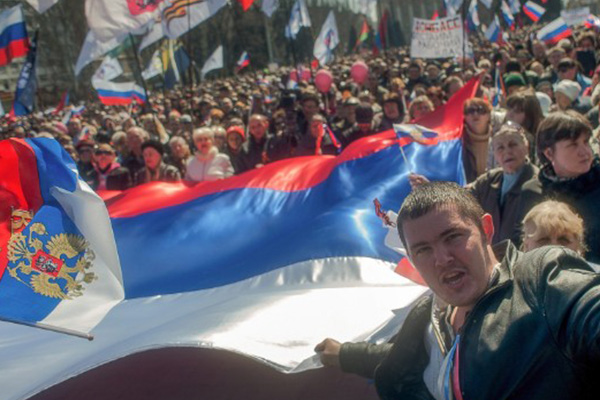 The protesters broke into a regional administrative building in the mining city of Donetsk on Sunday as well as security services offices in nearby Luhansk, where police said they had seized weapons.

A self-proclaimed legislature, representing what it called the Donetsk People’s Republic, then announced that it would hold a referendum by May 11 on whether the area should join Russia, Russian state-run news agency ITAR-Tass reported Monday. CNN has not confirmed the report.

Protesters also seized the regional administrative building in Kharkov. Interior Minister Arsen Avakov, in the city, said on his Facebook page Monday that the building had been cleared and that public employees had returned to work.

All three cities lie close to Ukraine’s border with Russia.

“It is absolutely clear that there is a realization of anti-Ukrainian, anti-Donetsk, anti-Luhansk and anti-Kharkov plans to destabilize the situation. The plan is (for) foreign troops to cross the border and seize the territory of the country,” Ukrainian Prime Minister Arseniy Yatsenyuk said. “We will not allow it.”

Mainly Russian-speaking eastern Ukraine has seen a sharp rise in tensions since a new pro-European government took charge in Kiev after the overthrow of pro-Moscow President Viktor Yanukovych in February. Donetsk, Yanukovych’s hometown, has seen several pro-Russian rallies in the last few weeks.

Moscow has branded the new government illegitimate and last month annexed Ukraine’s Crimea region, citing threats to its Russian-speaking majority — a move that has sparked the biggest rift in East-West relations since the end of the Cold War.

“There is a script written in the Russian Federation, the purpose of which is only one: the dismemberment and destruction of Ukraine. … This cannot be,” Yatsenyuk said.

Moscow had no immediate word about the comments.

In Donetsk, pro-Russian protesters raised the Russian flag atop the building and demanded the release of riot police accused of killing protesters in Kiev in February.

Police were negotiating with the demonstrators, who have called for supporters to rally around the Regional Security Administration building in Donetsk, about 200 kilometers (120 miles) from the Russian border. Deputy Prime Minister Vitaliy Yarema was headed to the city.

The protests are the latest challenge to Ukraine’s embattled new government, coming just weeks after Russia annexed the Black Sea peninsula of Crimea from Ukraine, after a local referendum deemed illegal by Kiev and the West.

On Sunday, a Russian soldier shot dead a Ukrainian navy officer in an officer’s dorm in Novofedorivka in Crimea, Ukraine’s Defense Ministry said in a statement posted on its website. The Ukrainian officer was getting ready to leave for mainland Ukraine.

“We reiterate our call for de-escalation and the avoidance of further destabilization of Ukraine,” she said.

Concerns are high that Russia, which U.S. officials have said had about 40,000 troops near the frontier, might seek to enter eastern Ukraine.

However, NATO later said it saw no sign that Russia was pulling its forces back from the border.

Yatsenyuk said Monday that Russian forces had not pulled back, adding that Moscow’s troops were within 30 kilometers (about 19 miles) of the Ukrainian border.

In a televised address late Sunday, he announced he would travel to his country’s eastern regions “to dismiss their fears.” He also said he would offer to decentralize power and give state financial support to local businesses.

In mid-March, Kiev’s new government warned that pro-Russian forces in other regions might attempt to follow the model used to wrest Crimea from Ukraine.