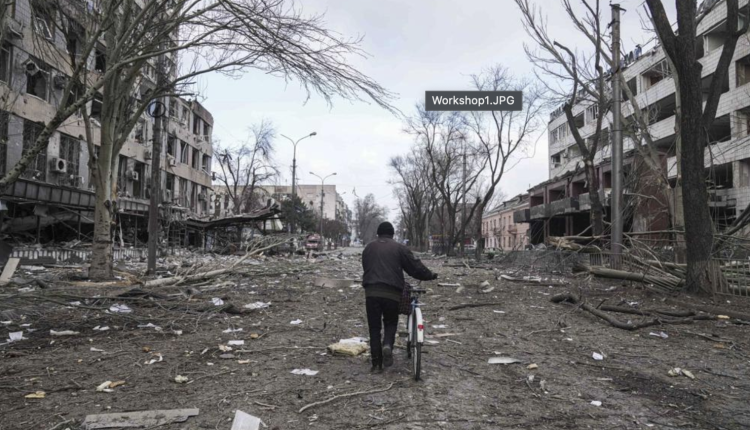 MARIUPOL, Ukraine (AP) — Civilians trapped inside Mariupol desperately scrounged for food and fuel as Russian forces kept up their bombardment of the port city Thursday, while satellite photos showed that a massive Kremlin convoy that had been mired outside the Ukrainian capital dispersed and redeployed.

International condemnation escalated over an airstrike in Mariupol a day earlier that killed three people at a maternity hospital, with Western and Ukrainian officials calling the attack a war crime. Ukrainian President Volodymyr Zelenskyy said the Russian refusal to permit evacuations from the port city amounted to “outright terror.”

Meanwhile, the highest-level talks held since the invasion began two weeks ago yielded no progress, the number of refugees fleeing the country topped 2.3 million, and Kyiv braced for an onslaught, its mayor boasting that the capital had become practically a fortress protected by armed civilians.

Satellite imagery from Maxar Technologies showed that a 40-mile (64-kilometre) convoy of vehicles, tanks and artillery has broken up and been redeployed, with armoured units seen in towns near the Antonov Airport north of the city. Some of the vehicles have moved into forests, Maxar reported.

The convoy had massed outside the city early last week, but its advance appeared to have stalled amid reports of food and fuel shortages. U.S. officials said Ukrainian troops also targeted the convoy with anti-tank missiles.

In Mariupol, a southern seaport of 430,000, the situation was increasingly dire. More than 1,300 people have died in the 10-day siege of the frigid city, according to Deputy Prime Minister Iryna Vereshchuk.

Residents of the southern seaport of 430,000 have no heat or phone service, and many have no electricity. Nighttime temperatures are regularly below freezing, and daytime ones normally hover just above it. Bodies are being buried in mass graves. The streets are littered with burned-out cars, broken glass and splintered trees.

“They have a clear order to hold Mariupol hostage, to mock it, to constantly bomb and shell it,” Zelenskyy said in his nightly video address to the nation. He said the Russians began a tank attack right where there was supposed to be a humanitarian corridor.

On Thursday, firefighters tried to free a boy trapped in the rubble. One grasped the boy’s hand. His eyes blinked, but he was otherwise still. It was not clear if he survived. Nearby, at a mangled truck, a woman wrapped in a blue blanket shuddered at the sound of an explosion.

Grocery stores and pharmacies were emptied days ago by people breaking in to get supplies, according to a local official with the Red Cross, Sacha Volkov. A black market is operating for vegetables, meat is unavailable, and people are stealing gasoline from cars, Volkov said.

Places protected from bombings are hard to find, with basements reserved for women and children, he said. Residents, Volkov said, are turning on one another: “People started to attack each other for food.”

The local fire department and the city’s State Technical University were bombed.

An exhausted-looking Aleksander Ivanov pulled a cart loaded with bags down an empty street flanked by damaged buildings.

Repeated attempts to send in food and medicine and evacuate civilians have been thwarted by Russian shelling, Ukrainian authorities said.

“They want to destroy the people of Mariupol. They want to make them starve,” Vereshchuk said. “It’s a war crime.”

All told, some 100,000 people have been evacuated during the past two days from seven cities under Russian blockade in the north and center of the country, including the Kyiv suburbs, Zelenskyy said.

Zelenskyy told Russian leaders that the invasion will backfire on them as their economy is strangled. Western sanctions have already dealt a severe blow, causing the ruble to plunge, foreign businesses to flee and prices to rise sharply.

“You will definitely be prosecuted for complicity in war crimes,” Zelenskyy said in a video address. “And then, it will definitely happen, you will be hated by Russian citizens — everyone whom you have been deceiving constantly, daily, for many years in a row, when they feel the consequences of your lies in their wallets, in their shrinking possibilities, in the stolen future of Russian children.”

″We will overcome them,” he said at a televised meeting of government officials. He did, however, acknowledge the sanctions create “certain challenges.”

In addition to those who have fled the country, millions have been driven from their homes inside Ukraine. Kyiv Mayor Vitali Klitschko said about 2 million people — half the population of the metropolitan area — have left the capital.

“Every street, every house … is being fortified,” he said. “Even people who in their lives never intended to change their clothes, now they are in uniform with machine guns in their hands.”

On Thursday, a 14-year-old girl named Katya was recovering at the Brovary Central District Hospital on the outskirts of Kyiv after her family was ambushed as they tried to flee the area. She was shot in the hand when their car was raked with gunfire from a roadside forest, said her mother, who identified herself only as Nina.

The girl’s father, who drove frantically from the ambush on blown-out tires, underwent surgery. His wife said he had been shot in the head and had two fingers blown off.

Western officials said Russian forces have made little progress on the ground in recent days and are seeing heavier losses and stiffer Ukrainian resistance than Moscow apparently anticipated. But Putin’s forces have used air power and artillery to pummel Ukraine’s cities.

Early in the day, the Mariupol city council posted a video showing a convoy it said was bringing in food and medicine. But as night fell, it was unclear if those buses had reached the city.

A child was among those killed in the hospital airstrike Wednesday. Seventeen people were also wounded, including women waiting to give birth, doctors, and children buried in the rubble. Images of the attack, with pregnant women covered in dust and blood, dominated news reports in many countries.

French President Emmanuel Macron called the attack “a shameful and immoral act of war.” Britain’s Armed Forces minister, James Heappey, said that whether the hospital was hit by indiscriminate fire or deliberately targeted, “it is a war crime.”

U.S. Vice President Kamala Harris, on a visit to Ukraine’s neighbour Poland, backed calls for an international war-crimes investigation into the invasion, saying, “The eyes of the world are on this war and what Russia has done in terms of this aggression and these atrocities.”

Russian Foreign Minister Sergey Lavrov dismissed concerns about civilian casualties as “pathetic shrieks” from Russia’s enemies, and denied Ukraine had even been invaded.

Lavrov and his Ukrainian counterpart, Dmytro Kuleba, held talks in a Turkish resort in their first meeting since the invasion.

The two sides discussed a 24-hour cease-fire but made no progress, Kuleba said. He said Russia still wanted Ukraine to surrender but insisted that will not happen.

Lavrov said Russia is ready for more negotiations, but he showed no sign of softening Moscow’s demands.

Russia has alleged that Western-looking, U.S.-backed Ukraine poses a threat to its security. Western officials suspect Putin wants to install a government friendly to Moscow in Kyiv as part of an effort to draw the former Soviet state back into its orbit.

In Vienna, the head of the International Atomic Energy Agency said it had scheduled inspections of Ukraine’s nuclear facilities. Rafael Grossi would give no details on how or when the inspections would take place.

Ukraine has 15 nuclear reactors at four power plants across the country, plus the closed plant in Chernobyl, scene of a 1986 nuclear disaster. Fighting around Chernobyl and another plant have raised global fears of another disaster.

In Kharkiv, Ukraine’s second-largest city, 91-year-old Alevtina Shernina sat wrapped in a blanket, an electric heater at her feet, as cold air blew in through a damaged window. She survived the brutal World War II siege of Leningrad, now St. Petersburg.

Her daughter-in-law Natalia said she was angry that Shernina “began her life in Leningrad under the siege as a girl who was starving, who lived in cold and hunger, and she’s ending her life” in similar circumstances.

“There were fascists there and there are fascists here who came and bombed our buildings and windows,” she said.