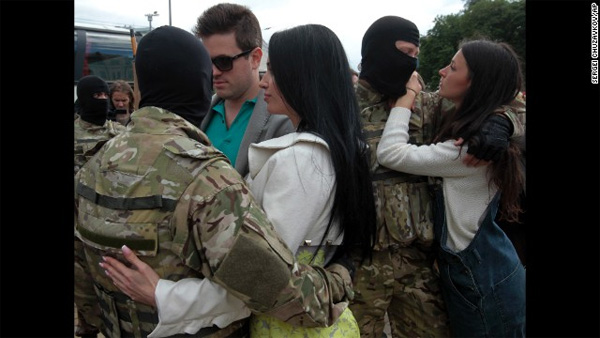 Moscow (CNN) — Russia’s upper house of parliament voted Wednesday to revoke the right of President Vladimir Putin to use Russian troops in Ukraine, as efforts to calm a separatist uprising in Ukraine’s east continue.

The Federation Council had approved Putin’s request for a resolution allowing for the use of force on March 1.

But on Tuesday, the President sent a letter to the speaker of the upper house asking it to cancel the resolution. Only one senator voted against revoking the powers Wednesday, with 153 in favor.

Putin’s request was made in light of ongoing talks on how to settle the crisis in Ukraine’s eastern regions, said presidential spokesman Dmitry Peskov.

Russia and Ukraine have been engaged in a tense standoff since March, when Russia annexed the previously Ukrainian peninsula of Crimea and massed troops along other parts of its border with Ukraine.

Ukraine’s new President Petro Poroshenko declared a cease-fire in Kiev’s fight against pro-Russia separatists last week in an effort to calm the situation.

But the violence continued Tuesday, when Ukrainian authorities said pro-Russia militants shot down a military helicopter in eastern Ukraine with the loss of nine lives.

Meanwhile, NATO foreign ministers, including U.S. Secretary of State John Kerry, are meeting in Brussels, Belgium, with the situation in Ukraine high on the agenda.

NATO Secretary General Anders Fogh Rasmussen said beforehand that the meeting — ahead of a NATO summit in Wales in September — came at a “critical moment for our security,” in the face of “old threats and new, from Eastern Europe to North Africa and the Middle East.”

Rasmussen said the 28 members of the alliance — some of whom are former Soviet states whose nerves have been frayed by Russia’s actions against Ukraine — had an “unwavering” commitment to their collective defense.

“Russia’s aggression against Ukraine led to the suspension of our practical cooperation. And I regret to say that we see no signs that Russia is respecting its international commitments. So today we will review our relations with Russia and decide what to do next,” he said.

“As we have seen Russia using a new, different type of warfare against Ukraine, we will also discuss how we can improve our understanding of ambiguous threats and how we deal with them in the longer term.”

Kerry discussed their joint support for Poroshenko’s peace plan and the importance of preparing additional coordinated sanctions if Putin does not take further steps to de-escalate, the official said.

The United States and European Union have already imposed targeted economic sanctions against Russian individuals and companies over Russia’s activities in Ukraine.

The resolution authorizing Russia to use force in Ukraine was passed only three weeks before Russia completed its annexation of Ukraine’s Crimea region, condemned as illegal by much of the world.