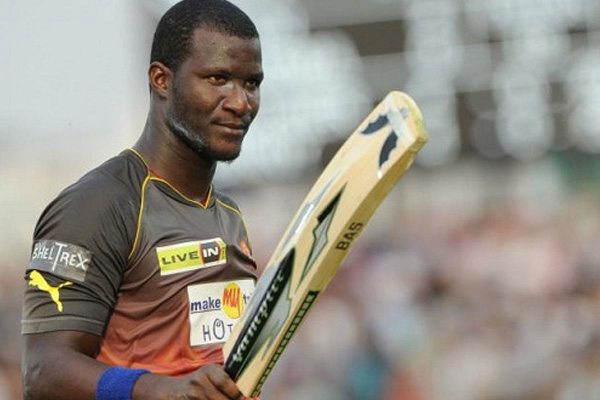 With runs two runs required of three balls Sammy took a double of the fourth to seal the match for Hyderabad and upset Bangalore’s plans of making the playoffs.

Sammy, who hit a six, was not out on ten as Hyderabad chased down the target to reach 162 for three after Bangalore had posted 160 for six at the Rajiv Gandhi International Stadium.

West Indies opening batsman Chris Gayle failed again with the bat, caught at short third man for 14 while attempting to hit over the leg side.

“We needed a win, last game in front of these beautiful fans,” declared Sammy who was recently replaced as West Indies test captain by Trinidadian wicketkeeper Denesh Ramdeen.

“Those last two overs from Bhuvi and Dale kept us in the game. Credit to our openers. We’ll go to Ranchi, try for a clinical performance, hope other results go our way.”

Sammy hit his first ball flat over the straight boundary, bringing the equation down to less than a run a ball.

He then sealed the win by chipping a slower ball from Mitchell Starc over cover, giving Sunrisers a foot in the door amidst a scramble for fourth place.

Hyderabad appeared to be coasting towards their target of 161 after a strong opening stand produced one hundred runs on the strength of half centuries from Shikhar Dhawan and David Warner.

However they slipped a bit as the chase was dragged into the last over making way for Sammy’s heroics.

Despite the victory, Sunrisers still need other results to go their way, as do Royal Challengers – both have ten points with two remaining games.