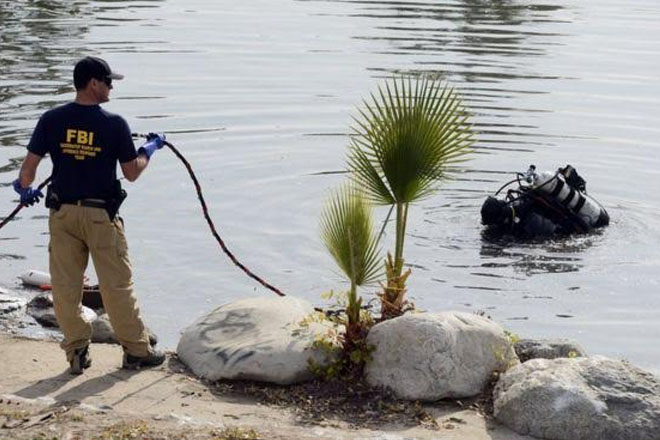 (BBC) A lake in California is being searched by police investigating last week’s shootings in San Bernardino, in which 14 people were killed.

Divers from the FBI began searching the waters of Seccombe Lake Park, two miles (3km) from the site of the attack.

The two suspects are thought to have visited the park on the day of the shooting, an FBI spokesman said.

The attack is being investigated as an act of terror, the deadliest in the US since 9/11.

The couple, who officials say became radicalised some years ago, were both killed in a shoot-out with police hours after the attack.

Addressing reporters at the park on Thursday, the FBI declined to specify what the divers were looking for.

“We have indications through leads that at some point they came to this park,” said David Bowdich, assistant director in charge of the Los Angeles field office of the FBI.

US media quoted law enforcement sources as saying they are looking for electronic devices, including a computer hard drive, linked to the shooters.

Earlier on Thursday, FBI Director James Comey and other senior US officials briefed members of Congress on the investigation, behind closed doors.

Concerns have been raised by some US politicians about how the couple were not picked up by intelligence officials as potential suspects.

American officials have said the pair discussed martyrdom and jihad as early as 2013, yet Malik was able to enter the US on a fiancee visa last year.

“Everyone’s asking the same questions about how it is that law enforcement didn’t know, or intelligence officials didn’t know, that they could have flown under the radar and nothing gave an indication that they were a threat,” said Jim Langevin, a member of the House Homeland Security Committee.

A service was held for Yvette Velasco, the first victim of the shooting to be buried, in West Covina, California.

Malik reportedly pledged allegiance to Islamic State militants on social media on the day of the attack.

According to a new poll by New York Times and CBS, the shooting has raised the fear of terror among Americans to its highest level since 9/11.