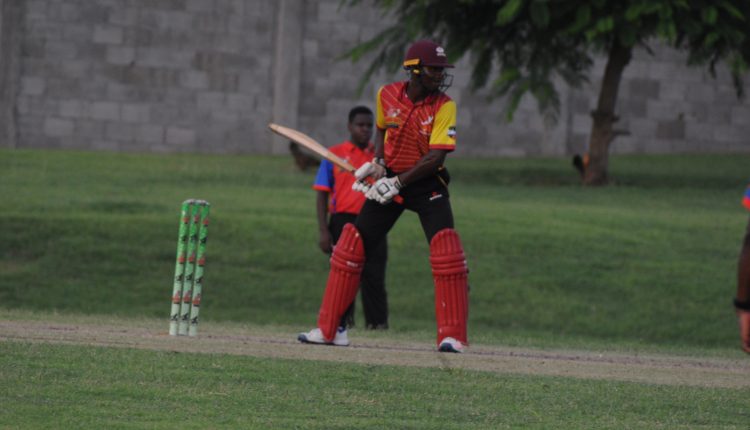 Molineaux/Cayon and Sandy Point will do battle in the Finals of the the Auckland Marley Hector T10 competition, following the Semi Finals held on Sunday at the Conaree Cricket Centre.

In the First Semi Final on Sunday, top seeded Sandy Point did Battle with fourth placed young Guns and marched into the finals with a dominating performance defeating Young Guns by 41 runs.

Batting first, Sandy Point posted a blistering 103 from their 10 overs with Shane Jeffers leading the way as he scored unbeaten 44, powering his side into a strong position before they took the field.

In response, Young Guns struggled with their batsmen finding it difficult to put away the Sandy Point bowlers as they limped their way to 62 for 4 off their 10 overs and out of the competition.

Sandy Point captain Dillin Liddie said his side put in a good all round performances and were prepared to face any opponent who they may face in the final.

Later on Sunday, Molineaux/Cayon booked their spot in the final after they got the better of Newtown. After being asked to bat first, Newtown posted 71 for 5 off their 10 overs with the young opening batsman Warde top scoring with 28. He featured for much of the innings, but the others failed to find consistency throughout and could only muster 71.

With an all pace attack Newtown got off to a solid start with their opening bowlers, but when the openers for Molineaux/Cayon departed, it brought Jacques Taylor and Jaeel Clarke to the crease who seamed untroubled by the bowling attack as they brought the game home with about 10 balls to spare.

Molineaux/Cayon Captain Clarke noted that he thought his side did the little things well during the game and played with better discipline.

On Saturday Molineaux/Cayon and Lions played in the final game of the round robin stage and it produced a nail biter as Lions secured their first points of the competition as the game ended in a tie.

Defending 70 runs the game looked all but lost for Molineaux/Cayon but a tight eight and ninth over saw them fight their way back into the match. Needing 7 from the last over Lions struggled as they lost three wickets. Lions still had a chance to win off the game needing two runs off the last ball but the skied attempt was dropped and the batsmen were only able to complete one run ending the game in a tie.

The final of the Auckland Marley Hector T10 will be played on Saturday starting at 3:00pm.