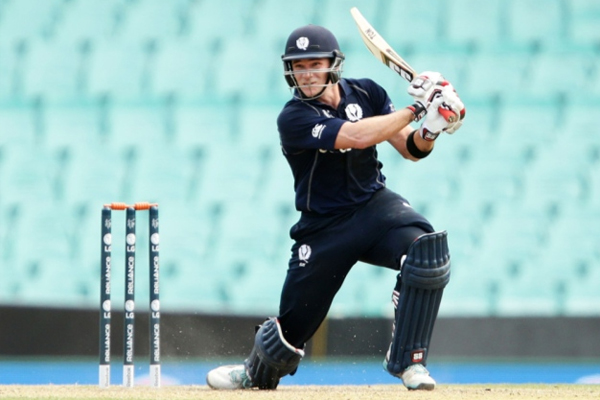 (Cricinfo) — Scotland nearly upset West Indies in their chase of 314 in the warm-up match at the SCG, but fell short by three runs despite needing 14 runs from the last two overs with four wickets in hand. Opener Kyle Coetzer led Scotland’s chase with 96 runs, followed by Richie Berrington’s 44-ball 66. Once Berrington was run out in the 49th over, Scotland lost two more wickets in the next six balls, as Kemar Roach defended 12 runs off the last over.

Scotland carried their form after thrashing Ireland by 179 runs in their first warm-up and West Indies were coming after a nine-wicket loss to England three days ago.

Scotland were given a strong opening stand of 75 in 14.4 overs by Coetzer and Callum MacLeod before Sulieman Benn’s double-strike put them on a shaky 124 for 3 in the 26th over. Freddie Coleman then combined with Coetzer with a reviving fourth-wicket stand of 60 runs in under nine overs. However, Coetzer fell for 96 off 104, which featured 14 fours, when he was caught off the other left-arm spinner, Nikita Miller.

Coming at No. 6, Berrington’s quick fire fifty made sure Scotland were back on top. Berrington and wicketkeeper Matthew Cross powered the innings with 86 runs in only 8.5 overs, bringing the equation down to 14 runs from 12 balls. The momentum then shifted back in West Indies’ favour when Berrington was run out on the third ball of the penultimate over by Andre Russell, who also had Rob Taylor caught three balls later, conceding only two from the over. Roach’s work was made easier for the last over and even though he leaked eight runs, it wasn’t enough for Scotland.