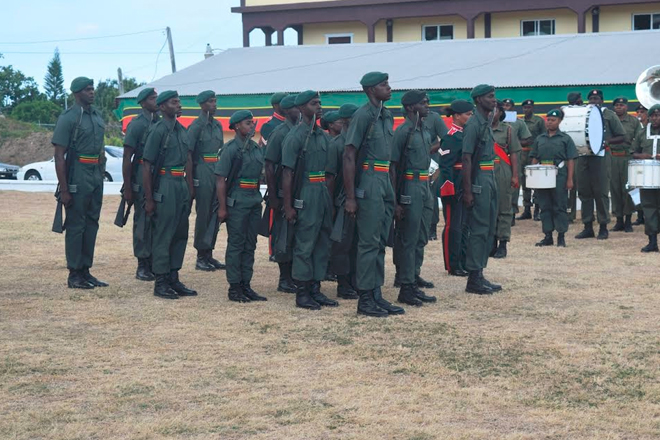 (PRESS SEC) – Prime Minister Dr. the Honourable Timothy Harris said at his recent press conference that both the St. Kitts and Nevis Defence Force and the Royal St. Christopher and Nevis Police Force have been “asked to consider special programs of engagement and reach-out to our young people.”

During his Monthly Press Conference on Wednesday, July 27th, Prime Minister Harris said that, “We encourage more of our young people, who are interested, to become involved in our security forces. That can be a helpful measure to see more of our citizens understand the importance of law and order and…directly become involved in serving their country that way,” adding: “I want to thank all those groups and organizations that have been active in providing support, solace and comfort to victims of crime, [and] have been proactive in attempting to ensure that we develop programs and activities that engage our young people and take them away from crime.”

Mr. Terrance James, who is Assistant Commissioner of Police with responsibility for the Operations Directorate, is charged with developing community partnerships, establishing neighbourhood watches and implementing other engagement strategies under the nation-wide Six-Point Action Plan. Additionally, under the 3-Year Improvement Plan, ACP James is responsible for developing youth-focused programs “to divert from crime,” as well as ensuring “police barriers are removed with youth” and that “youth voices are heard in the community.”

To this end, Assistant Commissioner of Police Terrance James recently struck up a partnership with members of the Cayon community, where he resides, as well as the Cayon Primary School, one of his alma maters. Pockets of the Cayon community are crime hotspots in the Federation of St. Kitts and Nevis; so concerned residents have become mentors in the MAY youth mentorship program, which stands for “Mentoring and Aspiring Youths.” The program was launched on Monday, May 30th to provide mentoring for about 30 Cayon Primary School students, both male and female, between the ages of seven and 11. ACP Terrance James is the Chairman of the MAY program and also one of the mentors.

In a press release issued by the police force on Friday, May 27th, ACP James said that, “I was happy to see this initiative come to fruition and grabbed the opportunity to be a part of it. If I can guide and help to mold one young person into a better citizen, that’s reward for me…and I’m sure for all of the other mentors.” He added that, “This is the kind of activity that we in the police service want to see in our communities. It ties in well with our efforts to build partnerships, and so the officers at the Cayon Police Station have embraced it as a part of their community engagement.”

The St. Kitts and Nevis Defence Force’s engagement with the community – particularly its robust recruitment efforts that bring together a diverse group of young people including those who are at-risk – was on full display on Thursday, April 14th at its passing out parade for its 20-week Basic Military Course. Two out of the 13 successful recruits came from the New Horizons Juvenile Rehabilitation Centre. Even more noteworthy, they are the first two recruits to come directly from there, according to its Director, Ms. Adele Williams. Ms. Williams and members of her staff attended the passing out parade to support the two recruits, who were part of the juvenile rehabilitation centre’s first intake cohort shortly after December 9th, 2013 when it began taking residents.

Prime Minister Harris has publicly recognized the important interventions that experts in child care, mental health and parenting can make in helping to reduce crime among young people who are at or under the age of 35 – a demographic that not only accounts for approximately 65% of the population of St. Kitts and Nevis, but also disproportionately comprises both victims and perpetrators of violent crime.

During Dr. Harris’ feature address at the passing out parade on Thursday, April 14th, he said that, “Truancy programs, parenting workshops, mentoring initiatives and the like can play a vital role in reducing homicides and violent crime, so we need all hands on board not only in the public sector, but in civil society to open up rehabilitative avenues for our families and, more importantly, our young people.”