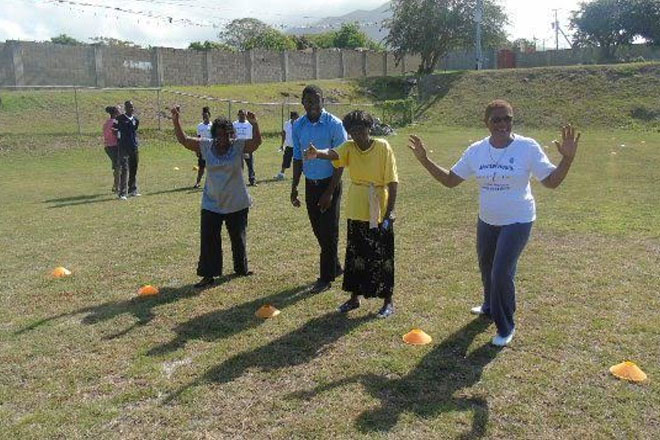 Sports Page — There was much excitement at the ET Willet Park on Thursday 10th September as the seniors commenced their official training sessions for their upcoming major event in October.

As part of the training, several of the seniors engaged national javelin champion and established sprinter, Adrian Williams, over a distance of 40 meters and ‘beat’ him to the tape.

Put aside the fact that the renowned athlete may have deliberately slowed up some, but the fact is, at least three of the seniors beat him to the tape and were happy to tell the tale afterwards!

They also engaged in jumping jacks; a practice with the tug of war and a practice relay.

Two of the athletes in Gwenneth Maynard and the vivacious Mary Herbert both indicated that they thoroughly enjoyed the experience and encouraged the general public to come on out in their numbers on the 15th of October when the action will start at 10 am at the ET Willet Park.

Trainer Masefield Nisbett opined that he may have underestimated the seniors and was certainly impressed with their exuberance and enthusiasm.

‘The public will be in for a great treat on October 15th. These seniors are going to make their day,’ he stated.

The grand sporting event will be one of the many activities scheduled for the month of October, which is officially designated as the month of older persons.