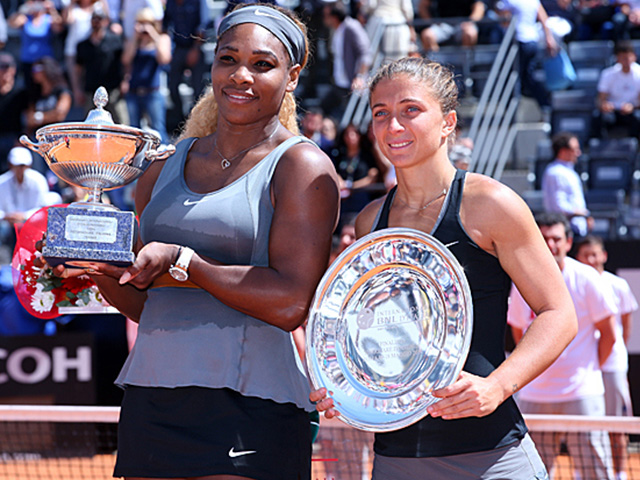 ROME — Serena Williams routed No. 11 Sara Errani 6-3, 6-0 to successfully defend her title and capture her 60th WTA title at the Italian Open on Sunday. Williams came into Rome without a clay-court title this season, and her participation in the tournament was in doubt after withdrawing from the Madrid Open last week with an upper leg injury. But she rebounded quickly and marched to her third title in Rome, losing just one set all week.

With her straight set win over Jelena Jankovic in the semifinal, Errani became the first Italian to make the final in Rome since 1985 and had the full support of the vocal Italian crowd from the start. But the match was as much a mismatch on court as it was on paper; Williams was 6-0 against the Italian No. 1 and had never lost a set to her on clay. Their last match came in the French Open semifinals last year, which Serena won 6-0, 6-1 in just 46 minutes.

Williams did her best to silence the pro-Errani crowd, racing to an easy 3-0 lead and had a point for 4-0 before a string of unforced errors let the underpowered Italian back into the match. Serving at 3-4 in the first set, Errani slid awkwardly on the clay and, after getting broken at love, called the trainer for an upper left leg injury. She did not win another game the entire match.

Williams unleashed her ground strokes, hitting 31 winners to 18 unforced errors (16 of which came in the first set) to cruise to her tour-leading third title of the season. Perhaps in reaction to the crowd and Errani’s injury concerns, her celebration was subdued, with just a quiet fist pump, and offered words of concern and comfort for Errani, who was in tears during the post-match festivities. Much to the delight of the crowd, Serena showed off her linguistic skills, and conducted her victory speech in Italian.

The win is a much-needed boost for Williams as she attempts to defend her title at the French Open which begins in one week. Rome has historically been an important catalyst for her success in Paris. In the two years she won Rome — 2002 and 2013 — she went on to win her only two titles at Roland Garros. As opposed to the WTA’s three other major clay lead-up tournaments in Charleston, Stuttgart and Madrid, the conditions in Rome are more comparable to what she will find in Paris. In the last two years, the women’s champion in Rome has gone on to win Paris.