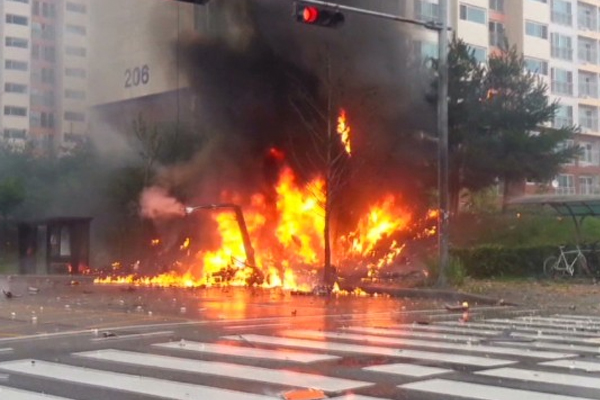 The helicopter came down in an urban area in the southwestern city of Gwangju, according to Gwangju and Gangwon Fire Headquarters.

Video footage from the scene showed what appeared to be the aircraft’s wreckage blazing on a city sidewalk near a stop light, with high-rise buildings only yards away.

The firefighters and rescue personnel on board were on their way home after spending the past four days supporting the search of the ferry, an official with Gangwon Fire Headquarters said.

At least 292 people, including more than 200 high school students, died after the ferry sank in April. Eleven people remain missing.

The dead included two pilots, two rescue workers, and one mechanic, the official said. The helicopter crashed after taking off from a refueling stop at a Gwangju airport.

The cause of the incident is not yet known.

The Sewol ferry was headed from Incheon to Jeju island on April 16 when it capsized. Most of the passengers were high school students on a field trip.