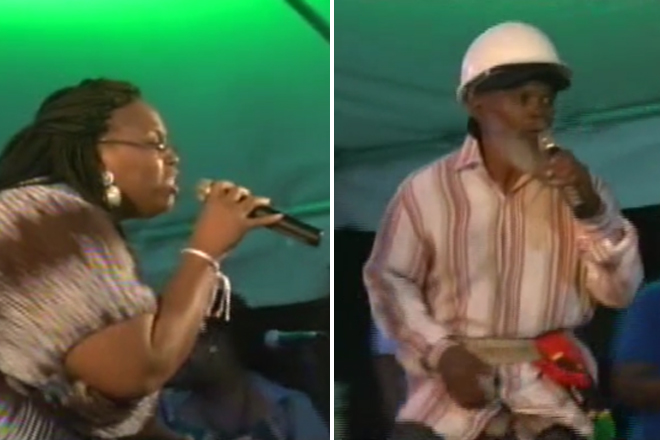 (ZIZ News) – The last of the calypso competitions for Sugar Mas 44 came to a close on Wednesday evening, as Shango the Calypsonian proved he is the Best of the Rest while Queen Kibi walked away the winner of the Female Bacchanal competition.

The show, held at 17 Degrees, saw eight calypsonians vying for the Best of the Rest title while five ladies contested the female component of the event.

In a telephone interview with ZIZ News, Director of Culture, Troy Mills gave a rundown of the Best of the Rest winners.

He said, “We had Fitzroy Robinson, De Provoker, with ‘Wash It and Bring It” amassing 193 points and earning the 2nd runner up position. Just ahead of him was Laughton Richards – King Godfrey – out of Green Valley. His tune ‘Wearing Blue’ earned him 215 points from the five judges and he copped the 1st runner up position. The king of the show was Walton Wilkin; that is Shango the Calypsonian, a former road march winner; and his tune ‘Sugar Money’ saw him getting 228 points and walking away with the crown for the Best of the Rest competition.”

He said this competition gives recognition to those witty calypsonians who did not advance to the Senior Calypso Monarch competition.

“The Best of the Rest competition is actually a competition where calypsonians who did not make it into the semi-final would have an opportunity to earn something; to compete and get a little crown, a little cash prize here,” Mills added, while thanking the calypsonians for taking part in the event.

The other competitors in the Best of the Rest event were Lord Mat, Lord Payne, La La, Lucius and King Rock-A-Fella.

“This was really, really close. It does not get any closer than this,” he said.

“In the 2nd runner up position, we had Queenie G, Gloria Esdaille-Robinson, with her song “A Son’s Remorse’ coming in at 209 points. Kimara Martin – that’s Lady Diva – she earned 222 points with ‘So Far So Good’ and Kibiane Willett — Queen Kibi – who has won the competition several times, with her tune ‘Make Those Strings Attach’ earned her 223 points from the judges and the coveted title of the Female Calypso Queen,” he explained.

The other two female calypsonians were Singing Candy and Singing Jennifer.