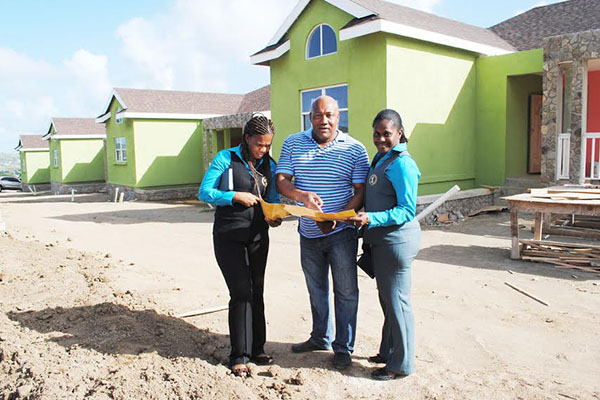 Basseterre, St. Kitts — Shelter is a fundamental human right and no one knows that fact better than businessman Mr Ashley Allers whose upmarket Montebello Residences in the Olivees area is providing housing solutions for the middle income group.

Mr Allers bought 12 acres of land in Olivees which forms part of Buckley’s Estate in Basseterre ten years ago and after doing feasibility studies, his initial plan was to create some sort of a middle income development.

“I recognised the government was taking care of the low income and the low middle income, and then you have the other developers on the other side of Frigate Bay and so on who were doing development more for the high end and so I felt there was a little gap for young professionals in middle and upper middle income bracket,” explained Mr Allers.

“I embarked on doing some research and out of sleepless nights trying to understudy what everybody else was doing I decided to create a development that would compete with developments on the other side of the island, but doing on this side, also trying to get our local people involved.”

The development was named Montebello Residences. According to Mr Allers, Montebello means beautiful mountains because he felt that the community he was developing needed an identity, and he was inspired by the mountains in the area which form a nice backdrop.

He approached the Development Bank of St. Kitts and Nevis for finance and he said that they were very supportive, especially the General Manager Mr Lenworth Harris, who was sold on the whole idea.

Manager Business Support Unit at the Development Bank, Mr Shavon Douglas, said that in the bank’s analysis they would have looked at a number of factors including the business viability.

He said the bank recognised that the housing market is one that has fair room for growth, especially within the middle income bracket, also recognising that there are interested parties who are desirous of owning homes, but do not have land in particular.

“As usual we are working closely with the project proposal,” said Mr Douglas. “We have on one end our Loans Monitoring Officer Ms Tiffany Richards who works very closely with Mr Allers on the request for disbursements.

“We also have our Technical Officer Mr Clyde Williams who overseas his requests and on a regular basis goes and looks at the project to evaluate and assess the stage that the project is in and its readiness to access new funds.”

Mr Douglas further noted that the Bank’s third arm which is the Business Support Unit has the Business Support Officer Ms Jasmine Primus visiting to lend support and have started to look at shaping a sales strategy for this business so that Mr Allers can adequately hit the targeted market that has been prepared and presented in the initial business report.

“Actual construction started in June 2013,” said Mr Allers. “For the stage that we have reached, the bank has given me sufficient funds and in terms of support and experience with the bank I believe it is a good one. The bank has been supportive as they have had their officers at every step of the way asking to give and to lend whatever support they can give and so on.”

Four homes which form the first phase of the development are ready and Mr Allers says he is now in the business of selling them. He feels that nationals living overseas will find the development a perfect option so that when they return to the country either on short holidays or even relocating for good, they will have a decent place to call home thus taking out the hassles of building a retirement home.

“In phase two of the development, we are going to have eleven buildings and each building will have sixteen to twenty-four one and two bedroom units,” he revealed. “These will be two and three storey buildings and they would have sundeck at the top, they will come fully furnished and there are four communal swimming pools within that area.”

The final phase will have homes on much bigger lots and there will be a common area with all the amenities, to include a gym, spa, and office. There will be some additional rooms at the top in what Mr Allers describes at a mixed development between villas, condos and cottages.

“The entire development is approved under the Citizenship by Investment Programme,” noted Mr Allers. “We also have an approval to sell by fractional ownership. It is very similar to what we call timeshare, so you could have one building having up to five owners.

“The entire project, once it runs how I want it to run it shall take about five to seven years to full development, which helps in terms of employment because just the four homes we were able to employ directly, about fifty persons.”

Apart from those employed directly, Mr Allers explained that there are those persons who are employed indirectly in the areas of landscaping, the heavy equipment people, the people who do the infrastructural work, and states that the development is creating employment during challenging economic times.