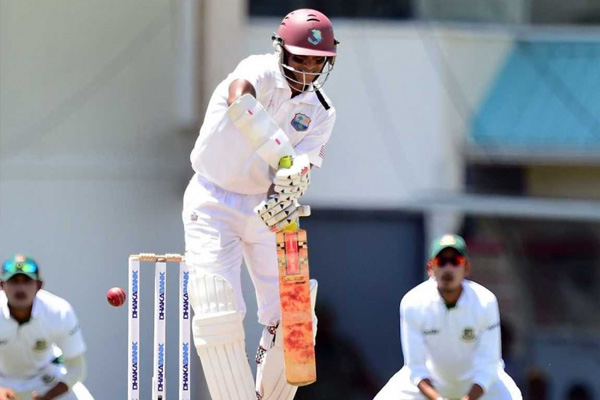 Dubai, United Arab Emirates — West Indies’ Shivnarine Chanderpaul has returned to the top three of the Reliance ICC Player Rankings for Test Batsmen following a stellar performance against Bangladesh in the second Test in St Lucia, which finished on Tuesday.

Chanderpaul scored 84 not out and 101 not out, his 30th career century, to end the series as the second highest run-getter with 270 runs. For his achievement in the St Lucia Test, he was rewarded with a jump of two places that has helped him leapfrog David Warner of Australia and Angelo Mathews of Sri Lanka into third position.

There were positive advancements for a couple of Bangladesh batsmen.

Opener Tamim Iqbal, who scored 48 and 64, has vaulted seven places to 37th position, while his team-mate, Mahmudullah, has soared nine places to 71st position following his half-century in the first innings.

In the Reliance ICC Player Rankings for Test Bowlers, West Indies’ fast bowler Kemar Roach has gained one more place following his six wickets in the second Test and is now on a career-high ninth position.

Left-arm spinner Sulieman Benn, who picked up five for 72 in the second innings, has moved up three places to a career-best 21st spot, while Jerome Taylor is the biggest mover in the latest rankings – gaining 12 places to claim 40th position.

India’s Ravichandran Ashwin continues to lead the way in the Reliance ICC Player Rankings for All-rounders.

No movements in Test rankings

There is no change in the Reliance ICC Test Team Rankings Table, which is headed by South Africa. However, the 2-0 series win has given the West Indies one ratings point, which has moved it to 75 ratings points, while Bangladesh has dropped two points to slip to 19 ratings points.

Test cricket resumes next month when Pakistan and Australia go head to head in the United Arab Emirates (UAE) and Bangladesh hosts Zimbabwe.