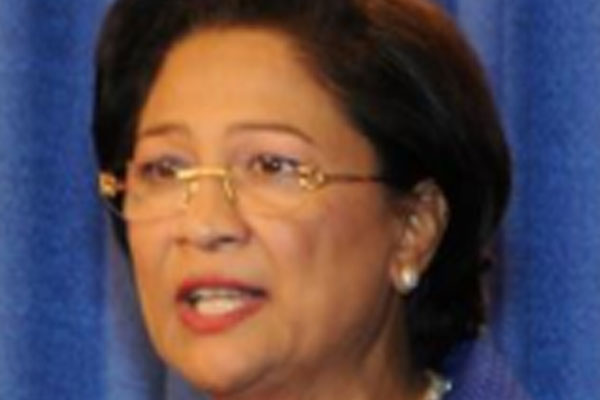 Port of Spain, Trinidad — In a statement on Wednesday, issued following the shootings at the Canadian parliament in Ottawa, Trinidad and Tobago’s prime minister drew a parallel with the 1990 attempted coup that involved a violent assault on the parliament building in Port of Spain by Muslim extremists.

“Incidents such as this one remind us of the attack on this country’s democracy 24 years ago, when insurrectionists stormed our nation’s Parliament in the Red House in an attempt to overthrow the democratically-elected government,” Prime Minister Kamla Persad-Bissessar said.

In a separate statement, minister of national security, Senator Gary Griffith, said that the cost of real freedom is eternal vigilance and that those who fail to prepare are dooming themselves to failure should the worst occur.

“…no country is safe from the violent and the depraved. As such, security experts and law enforcement personnel remain vigilant and must to be armed and ready to deal with any attack against our country’s freedom and democracy,” he added.

Earlier on Wednesday, a gunman opened fire at the National War Memorial in Ottawa, wounding a soldier, and then moved to nearby Parliament Hill where he was shot by Parliament’s sergeant-at-arms, Kevin Vickers, 58, a former police officer with the Royal Canadian Mounted Police (RCMP) for nearly three decades.

The suspect in Wednesday’s shootings in Ottawa had connections to jihadists in Canada who shared a radical Islamist ideology, including at least one who went overseas to fight in Syria, US media reported on Thursday.

Vickers had reportedly previously warned of ongoing flaws in security at the Canadian parliament building but his concerns had apparently fallen on deaf ears. On Thursday, Canadian Prime Minister Stephen Harper pledged to boost security forces’ surveillance and detention powers.

The renewed focus on the failed coup attempt in Trinidad and Tobago in 1990 that left 24 people dead and millions in property damage comes just a few days after the event was referred to by Jamaica’s National Security Minister Peter Bunting after one of the coup’s leaders Yasin Abu Bakr was last week refused entry into the country.

In explaining the decision by the Jamaican authorities to refuse entry, Bunting said it was important to share a brief history of Abu Bakr’s and his Jamaat al Muslimeen group’s conflict with the law.

In 1990, Abu Bakr co-organized and attempted a violent coup d’état, with the suspected aim of establishing an Islamic state in Trinidad and Tobago. The country’s then Prime Minister, A.N.R. Robinson and other Parliamentarians were taken hostage. The prime minister was subsequently shot and another member of parliament was killed. Twenty-four deaths were attributed to this coup attempt.

A 2014 commission of enquiry report into the 1990 attempted coup identified Abu Bakr as the unrepentant mastermind and described him as “ruthless”.

In November 2005, Abu Bakr was arrested and charged with inciting extortion and sedition. A search of his office turned up a high-powered assault rifle, along with a hand grenade and 700 rounds of ammunition.

In 2007, Bakr found reason to deny connections that were made between him and an alleged plot to bomb the JFK International Airport in New York. The alleged plot led to the arrest and conviction of two nationals from Guyana and one from Trinidad and Tobago.

To date, three members of Bakr’s Jamaat Al Muslimeen group have pleaded guilty to the murder and dismemberment of a Trinidadian woman.

It has also been reported that a number of Trinidadians are currently fighting for or otherwise aiding ISIS and other Islamic terrorist groups. There is therefore a possibility that there are now connections between radicals and militants in Trinidad and some of the most dangerous and ruthless terrorist organizations in the world.