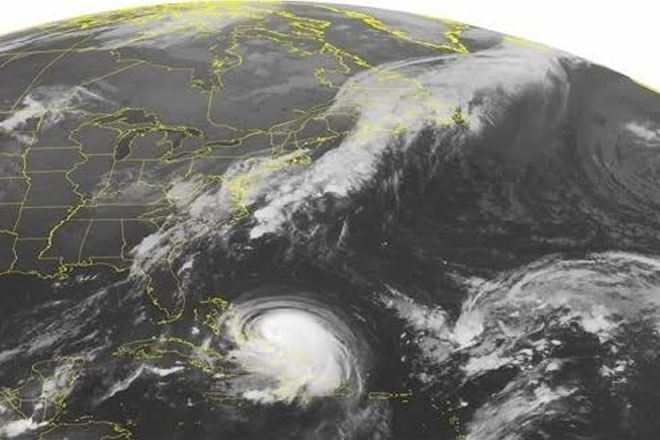 Nassau, Bahamas (AP) — Powerful Hurricane Joaquin bore down Thursday on the lightly populated islands of the central and eastern Bahamas and forecasters said it could grow more intense while following a path that would near the US East Coast by the weekend.

Some minor flooding and storm surge were reported, but there were no immediate reports of casualties or significant damage as the storm reached the island chain, said Capt. Stephen Russell, the director of the Bahamas National Emergency Management Agency.

Islands such as San Salvador, Cat Island and Rum Cay were expected to experience the most significant effects before the storm begins an expected shift toward the north, forecasters said.

“Everyone is just trying to get their stuff battened down,” said Frances Missick, chief councilor of Rum Cay, which has a population of about 100 and 40 homes.

Missick and other people on the small island gathered in a shelter set up at the St. Christopher Anglican Church. As of Thursday, there was only some minor flooding and power and water were still running.

Joaquin was a Category 3 storm with maximum sustained winds of 120 mph (195 kph) and hurricane strength winds extending 35 miles (55 kilometres) from the eye, the US National Hurricane Center in Miami said. As of 8:00 am EDT, the centre of the storm was about 10 miles (15 kilometres) north of the uninhabited Samana Cays, Bahamas, and was moving west-southwest at 5 mph (7 kph).

The storm was predicted to turn to the north and northwest toward the United States late Thursday or Friday, but forecasters were still gathering data to determine how it might affect the US East Coast, which was already suffering flooding and heavy rains from separate storms.

“There’s still a distinct possibility that his could make landfall somewhere in the US,” said Dennis Feltgen, a meteorologist and hurricane center spokesman.

On Eleuthera, a narrow strip to the north of Cat Island, people removed stray coconuts and other debris from their yards and put up storm shutters in blustery winds, said Chris Gosling, who runs a volunteer ambulance service on the island. Islanders have learned from past storms not to take chances.

“People don’t panic too much. There’s nothing you can do about it. If it comes, it comes, and you do what you can,” said Gosling, who has lived on Eleuthera for 27 years. “If the forecast is right we will get some wind and rain and it will go back out to sea.”

The Hurricane Center said parts of the Bahamas could see storm surge raising sea levels 5 to 8 feet (as much as 2.4 meters) above normal, with 10 to 15 inches (250 to 380 millimetres) of rain falling on the central Bahamas.

The U.S. National Hurricane Center’s long-term forecast showed the storm could near the US East Coast along North Carolina and Virginia on Sunday or Monday.

“Residents of the Carolinas north should be paying attention and monitoring the storm. There’s no question,” said Eric Blake, a hurricane specialist with the center. “If your hurricane plans got a little dusty because of the light hurricane season, now is a good time to update them.”

Meanwhile, the Meterological Service of Jamaica says that although Hurricane Joaquin is not a direct threat to Jamaica, a trough induced by the system is expected to increase moisture and instability across the island today through to Friday.

As a result, the Met service forecast that showers and thunderstorms, which could be heavy at times, will affect the island especially across northern and southwestern parishes.