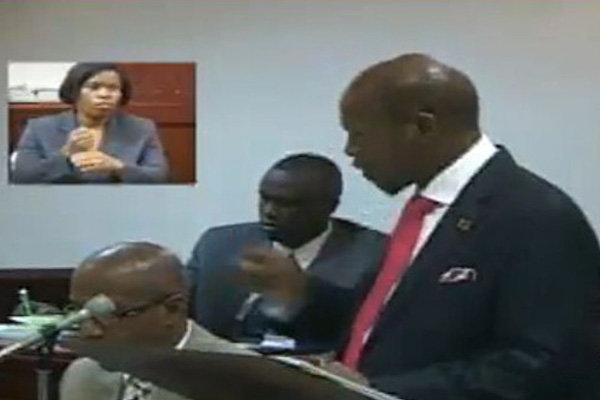 As such, members of the general public who are hearing impaired, were able to understand the budget allocations for 2014 instantly, as they were being presented by Prime Minister the Right Honourable Dr. Denzil L. Douglas.

The ASL was signed by Lanisia Collins-Williams, a teacher at the Cotton-Thomas Comprehensive School.  Mrs. Collins-Williams explained to the St. Kitts and Nevis Information Service that she would like to see such initiatives continue.

“Sometimes when we go to work and start talking about things on the news – they [the hearing impaired] ask what you talking about because they are not able to hear and understand what’s going on,” Mrs. Williams explained.  “Somebody will have to come and relate it to them and really and truly as they are part of our general population, they have a right to easy and immediate access to information.”

Mrs. Williams also attended a UNESCO-sponsored Consultation on Issues Impacting Persons with Disabilities, held November 26 to 28 which is one of the activities of the local Human Rights Sensitization Project launched December 3, 2012.  As such, the meeting which was coordinated by the Ministry of Social Development sought information from caregivers and family members, the business sector as well as groups and organizations that service persons with disabilities.  The need for the drafting of specific legislation, and incentives for inclusion in public life of persons with disabilities, were discussed.

At the workshop Permanent Secretary in the Ministry of Social Development Sharon Rattan encouraged the public to appreciate the fact that we all have challenges.

“I want us to remember that we all have disabilities,” Ms. Rattan emphasized.  “They may not be as obvious as some, but the point is – if we take the attitude of enabling what we have, this is the angle that we have to come from – enabling the abilities that exist.”

Prior to signing for the 2014 Budget Presentation Mrs. Williams said that her emotions varied.

“I’m a bit nervous, but yes indeed excited because it’s something that’s been discussed for a while and it’s about to actually happen, so that’s exciting indeed,” Mrs. Williams emphasized.

The Cotton-Thomas Comprehensive teacher revealed that she first became interested in signing as a teenager while attending the Good News Baptist Church and further reinforced her skill by attaining a degree in ASL at the Calvary Baptist Bible College, Puerto Rico.  This was followed by a Degree in Special Education at Mona Campus, University of the West Indies, Jamaica.