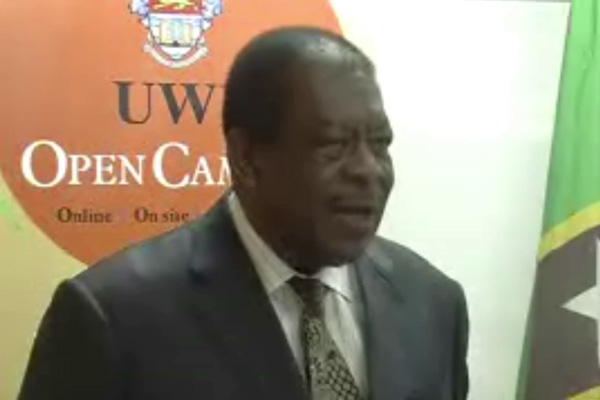 Held in the conference room of the University of the West Indies Open Campus in Basseterre, the event attracted the attendance of several high ranking officials including Resident High Court Judge, Justice Marlene Carter.

Sir Dennis joins other presenters who have spoken at various distinguished lectures across the region in recognition of the 800th anniversary of the Magna Carta.

His presentation started with an overview of the Magna Carta.

“The Magna Carta is a legal instrument that was issued under the authority of King John of England in 1215, 800 years ago,” he said, adding that “It is an instrument upon which many constitutions, including those in our CARICOM region, are based. In other words, at least once every year, this legal document is referred to and cited by Caribbean judges, at least once per year over the last 46 years,” Sir Dennis explained.

Magna Carta is a latin phrase which means “great charter” and Byron explained its significance.

Senior Lecturer in Political Science and Coordinator of the Constitutional Affairs and Parliamentary Studies Unit for UWI, Dr. Hamid Ghany also spoke at the ceremony.

He said several islands are benefitting from the distinguished lectures.

“Part of what had been proposed was that we would try, as far as possible, to spread it geographically across the region, in many different sites. I’m very grateful to the University of the West Indies’ Open Campus and all of their country heads who have facilitated me in having these lectures as well as my colleagues at the Cave Hill and Mona Campuses of UWI who have also been quite helpful in assisting me with all of this,” he said.

Head of the UWI Open Campus, Susan Owen also spoke at the ceremony. She said her office supports regional dialogue through expert presentations.