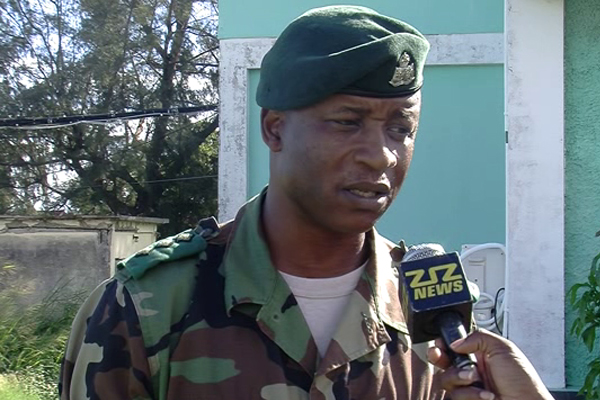 (ZIZ News) — As the recruitment for soldiers continues, Public Affairs Officer for the St. Kitts-Nevis Defence Force, Captain Kayode Sutton, says there are incentives for applicants.

He said among other things, the Defence Force promotes continued education.

“Persons applying, if they have some CXC subjects, it will be a plus for them,” he said adding “If they don’t when they come in, we have an academic programme that the Force enforces that persons who come into the Force with nothing, that is academically, will not leave the Force with nothing. So, we give them opportunities while they are in the Force to attend classes and also qualify them in different ways to pick up some lifelong careers: plumbing, electrician, carpentry, you name it, everything. And also, they also get an opportunity to take a shot at the CXC. We have classes that we run, which are for English and Maths and as well in other subjects,” he added.

When asked about the usual turnout of persons during recruitment, Captain Sutton said it is encouraging.

“We do get good turnout. Unfortunately, what happens is persons that apply, I don’t think they take their time to try to find out what kind of career they are trying to get into. It ends up like persons come in just looking for a job. Joining the military is not a job, it’s a profession. You have to love it to be part of it because it’s not easy, it’s rigorous. It could be intense sometimes but it’s also worth the opportunity to give it a try because there are tremendous opportunities within the Force, educational opportunities, not just locally, internationally as well,” he said.

The SKN Defence Force is, until March 2015, recruiting persons to serve as part of the Reserve Corps and as active duty soldiers.