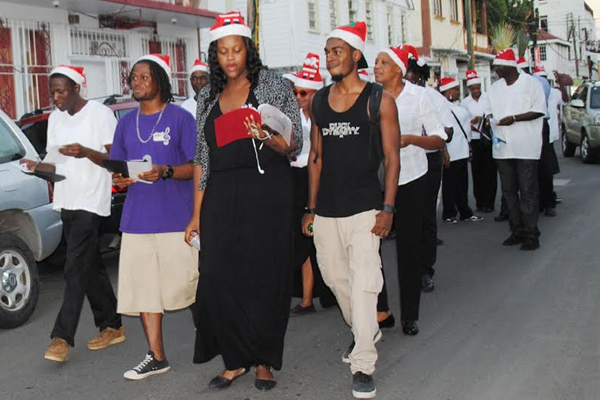 Basseterre, St. Kitts — It was a message like no other for an effort that has no parallel. The awesome message came from the mouth of Bishop Matthew Hepburn of the Word of Life New Testament Church on Central Street, Basseterre, on Monday evening December 22 as he expounded on the true meaning of Christmas.

It all started with the Parliamentary Representative for Basseterre Central (No 2) the Hon Marcella Liburd who marshalled members of the Executive Committee of St. Kitts Nevis Labour Party branch to bring Christmas message and cheer to the residents of her constituency by singing carols on the streets, and lighting of two Christmas trees.

Donning Christmas hats, the branch officials who had been joined by other members and supporters of the Labour Party started the procession from Hon Liburd’s constituency office on Central Street led by Ms Karisa Willet signing popular Christmas carols and headed to Five Ways where the first Christmas tree lighting was to take place.

Members of the branch who supported their parliamentary representative, the Hon Marcella Liburd, and took part in the carol singing included Mr Sydney Bridgewater (Chairman), and Mr Rudolph Morton who serves as a representative of Constituency Number Two on the National Executive of the St. Kitts Nevis Labour Party.

At Five Ways, Bishop Matthew Hepburn was invited to open with a short message and a word of prayer to bless the event. He repeated the age-old story of how the Virgin Mary was approached by an angel who told her that she was highly favoured, as the Lord was with her.

He told the persons gathered on the green at Five Ways that if they looked up the Greek word for Christ, they would find that it mainly speaks of the Anointed One, and His anointing.

The Bishop then reminded them that the full name for St. Kitts is actually St. Christopher.

After the short prayer session, the singing of carols continued, this time being led by the melodious Ms Doldria Penny. Other performers included five-year-old Miss Mahalia Hodge-France who stole their hearts, Mr Jervin Vanterpool, while a duet was performed by Mr Khareem Cabey on the tenor sax and Mr Bernell ‘Blues’ Hobson on the trumpet.

The Hon Marcella Liburd flipped the switch to light the Christmas tree at 6:20 pm to a great applause from those present. She thanked all the carollers and informed them that their next stop was the Dorset Park. Before they left, Christmas gifts were distributed, by the Minister assisted by Mr Damian Maynard who played the role of Father Christmas, to children of the area.

The carollers, this time led by Ms Doldria Penny walked on to Cayon Street, and moved east to the junction of Market Street where they took a left turn and then on to Dorset Avenue and into Dorset Park, where scores of children and a handful of parents were waiting for them.

Before the carol session started, Major Roxroy Campbell of the Salvation Army also gave them a talk on the true meaning of Christmas, and blessed them with a powerful prayer. The carollers had the backing of guitarist Mr Victor Payne. Ms Karisa Willett rendered a solo, while Ms Etsu Bradshaw-Caines read a rib-tickling poem.

Switching of the Christmas tree lights was done at 7:16 pm jointly by the Hon Marcella Liburd, who is also the Federal Minister of Health, Community and Social Development, Culture and Gender Affairs, and a darling of the Dorset community, Mrs Viola ‘Coolie’ Jeffers-Phillip. Children were also given gifts.

Giving the vote of thanks was local resident and hero Mr James ‘Barman’ Hanley who thanked the Minister for organising the Christmas tree lighting event which was the first time that it had been done, and beseeched her to make it an annual event.

“We want to make it an annual event so as we can continue to bring to our communities the true meaning of Christmas,” commented the Hon Liburd. “We would want to ensure that our communities understand that it is the birth of Christ that heralds Christmas.