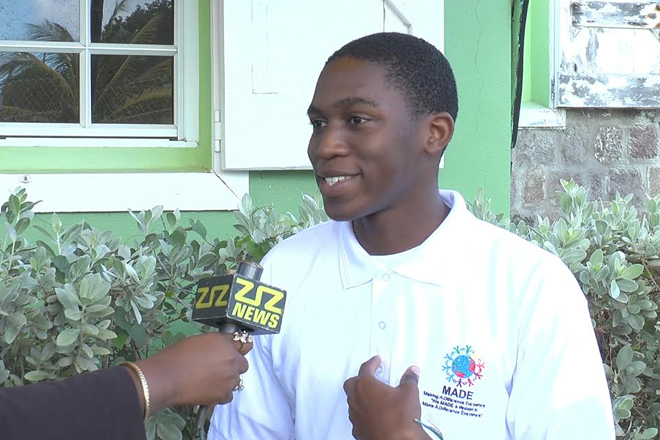 (ZIZ News) — Nineteen year old Trevis Belle has been nominated as a Queen’s Young Leader for St. Kitts and Nevis.

ZIZ sat down with Belle who said that the Queen Young Leader Programme is actually an online course conducted by a London based university that helps develop leadership skills among youth in the Commonwealth Nation.

“You have to be 18 to 29 years old and you have to be residing in one of 53 Common Wealth states to be nominated. The program is basically an online course conducted by The University of Cambridge where you gain mentoring skills, leadership skills, capacity building skills to help raise more awareness about your projects, to help bring more attention, to help you better network and gain partnerships etc.,” Belle said.

Belle mentioned that this programme gives him the opportunity to shine among those in his community and helps him to fulfil the mission of his organization “Making A Difference Everywhere” (M.A.D.E)

“In the community of Mc Knight where I’m from, you’re normally stereotyped with all negative things so I wanted to break that barrier,” he said.

He continued “I wanted to bring positive light to my community thus the creation of M.A.D.E. and since its creation we’ve been involved in different projects such as mentoring programs, anti-bullying campaigns, different awareness raising campaigns, visit the elderly home, basically humanitarian acts. So I guess someone saw potential in what I am doing as a Youth Leader and nominated me for the programme which I’m very much thankful for as well”.

Trevis Belle is the second Kittitian recipient of this award.

Javon Liburd was the first.