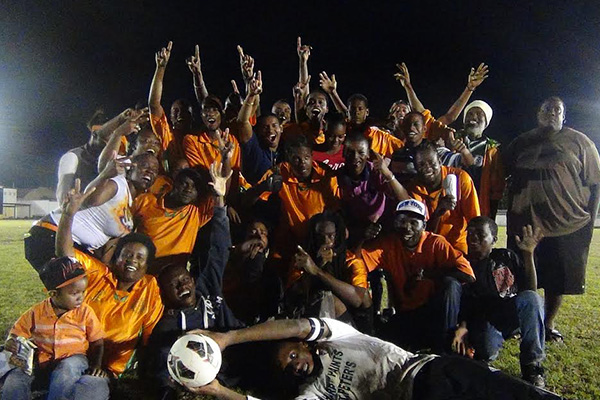 A stunning goal from about 25 yards out, set the ET Willet Park ablaze as CCC Bath United held on for dear live  in a deciding encounter inn the best of three finals in the local Football league, versus SL Horsfords Highlights Int..

The goal scorer was the man called JELLO, one of the several Kittitian players on show.

CCC Bath United looked comfortable at half time with a 2 goals to 1 score line and seemed on course to at least force a game three, with SL Horsford Highlights already winning the first game.

However, about midway in the second half, the Highlights team equalized and about 10 minutes before the final whistle for regulation time, made it 3 goals to 2 much to the jubilation of their huge fan base.

The score was tied up 3 goals all and the fans who made up the huge and vociferous crowd, just could not contain themselves..  The support was strong for both teams

With the scores tied on 3 goals –all, the game then went into extra time which included two fifteen minutes slots. At the end of the half an hour of extra time, the scores remained tied and the winner had to be resolved by penalty kicks.

JELLO kicked first for Bath and his powerful right booter, rolled off the fingers of PAS Turner and smashed into the left upright.

A confident Turner then sunk home one of his own.

The second kicker for Bath scored but the third also found an upright…this time the right, much to the chagrin of the many Bath supporters.

It was the Highlights team and their supporters who took over the ET Willet Park in real celebratory fashion.

SL Horsfords Highlights, the 2014 champions of Football on N eves.

SLH winning 3-1 on penalties after each team took 4 shots each.

League and Final Four Champions for 13-14

There will be an awards ceremony coming up soon. Date to be announced shortly