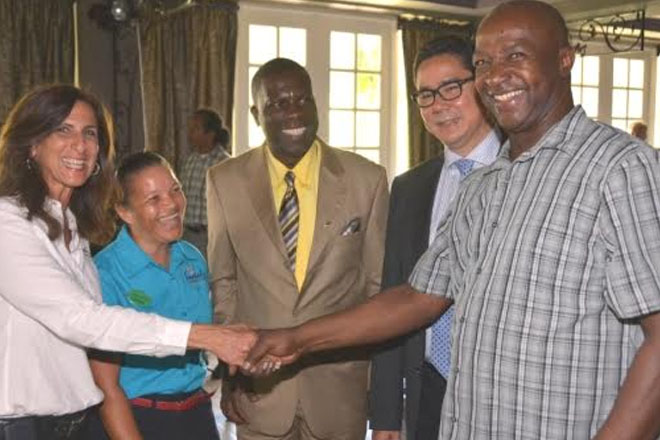 St James, Jamaica (JIS) — Small-scale farmers in Jamaica and across five other Caribbean countries are being empowered to play greater roles in the food security of the region, through the ‘Sustainable, profitable value chains and market linkages in the Caribbean’ project.

The project which is estimated to cost some US$1.5 million was officially launched on August 4 at a ceremony held at the Sandals Ocho Rios Resort in St Ann.

It will target some 2,220 small scale farmers, in six countries namely Jamaica, St Lucia, Grenada, St Vincent and the Grenadines, Barbados, and Antigua and Barbuda. The main objectives of the project are to equip and support small scale farmers with the skills and technology to cultivate better quality goods and to attract more lucrative markets for their produce.

The project is being implemented by the Caribbean Farmers Network (CaFAN) and funded by the Technical Centre for Agricultural and Rural Cooperation (CTA ACP-EU) in partnership with the Sandals Foundation.

“We are truly honoured to be a part of this game changing moment, as we continue the process of equipping our farmers with the skills and technology to cultivate better quality goods and attracting more valuable markets,” Grant noted.

He informed that on June 20th, this year, CaFAN signed a three year contract with CTA in an effort to build sustainable and profitable value chains and market linkages for small scale farmers in the Caribbean.

“The CTA aims to build strong relationships of trust between farmers and buyers along the value added chains, to leverage the power of markets for sustainable livelihood of family farmers and youths in the Caribbean. It also serves as a platform for building partnerships with the private sector, agricultural organizations and institutions,” Senator Grant said.

Referring to the ‘Eat what we grow, Grow what we Eat’ campaign, Grant said the programme was a success, as the country’s domestic crop production moved from 497,000 metric tonnes to 614, 917 metric tonnes in 2013.

“Our youths and women throughout the region have been marginalized from income-earning activities, including commercial agricultural activities. They need to be empowered and encouraged to become major players in the agriculture sector,” Senator Grant told the participants in the launch.