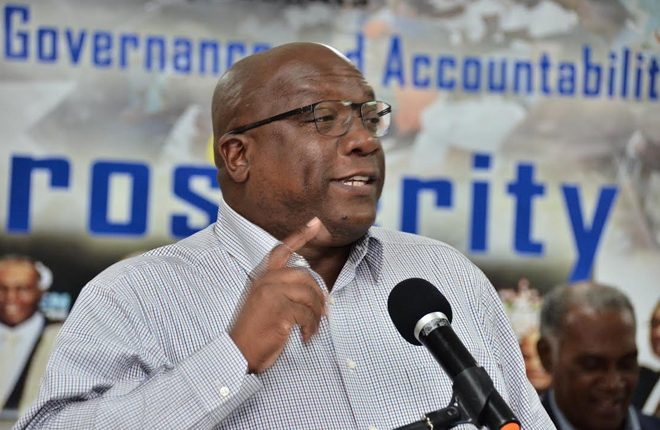 (SKNIS): The Government of National Unity has managed to maintain a surplus of funds despite the numerous activities and initiatives, which have been implemented over two years, says Prime Minister, Dr. the Honourable Timothy Harris, speaking at last night’s (February 13) “Good Governance and Accountability for Prosperity” Town Hall Meeting at the St. Paul’s Anglican Church in Charlestown, Nevis.

“Willful waste makes woeful want,” said the prime minister, commenting that there has been no waste of the public funds.

“We do not want any woeful want in the country,” he said. “So, you must be proud of your government because even when we are doing all of these things, the country is still in surplus. We are managing the books of the country well. The fiscal house of St. Kitts and Nevis is in order.”

The prime minister said the surplus is evident according to what the government’s accounts, the Eastern Caribbean Central Bank (ECCB), the Caribbean Development Bank (CDB), the Economic Commission for Latin America and the Caribbean (ECLAC) and the International Monetary Fund (IMF) have reported.

“All of them have commended your government,” said the prime minister. “We are an above average performer and we are among the best performing countries, not just in the Organization of the Eastern Caribbean States (OECS), but the entire world.”

Prime Minister Harris said that what also makes St. Kitts and Nevis unique is that it has delivered a stellar performance, while other countries are looking at one percent to no growth.

“That is what we are doing,” he said, explaining that before the two years of the Government of National Unity, there was an economic situation in which the country could not be proud of. As such, a quarter billion dollars was borrowed from the IMF.

“We who had nothing to do with that debt; we who were advising that there is a better way, we came into office and we said that the taint on the country’s reputation, that taint that made us a pariah among well managed nations should be removed from our country,” said the prime minister. “I authorized $117 million to be paid to the IMF and wiped off the slate of indebtedness to our financial institution. One hundred and seventeen million dollars gone just like that and we are still in surplus.”

The prime minister also said that the provisions for the VAT reduction cost the country approximately $60 million, but that the country has maintained a surplus.

“[This is so] because we are managing the country well,” he said. “We gave in 2016 over $100 million in concessions, but we are still in surplus. “We did what no other country in the world has done. We have become a leader in macroeconomic management, not just compared to Antigua and Montserrat, just with the big fellows in Caribbean Community (CARICOM), not just with the United States of America, but in the entire world.”