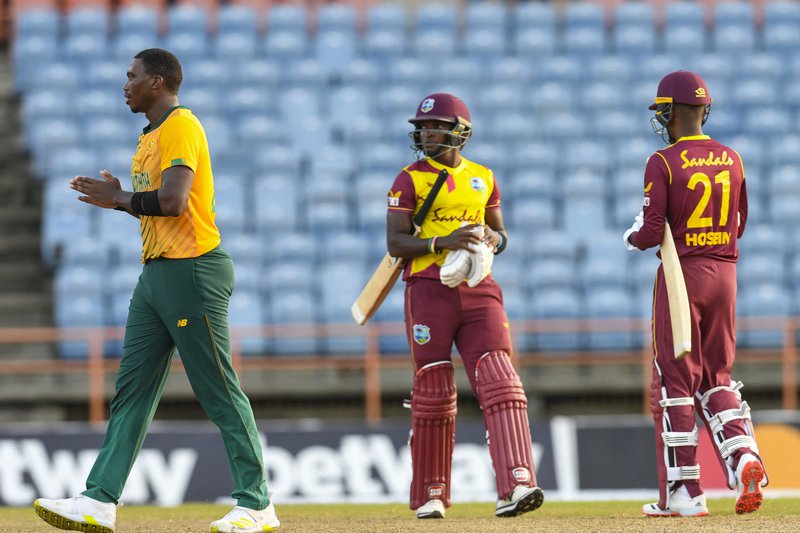 South Africa Get Better Of West Indies In Grand Finale

West Indies fell at the final hurdle as they lost to South Africa in the fifth match of this enthralling CG Insurance Twenty20 Series. The Proteas claimed a series-clinching 25-victory at the Grenada National Cricket Stadium on Saturday. Defending a total of 168-4, thanks to half-centuries from Aiden Markram and Quinton de Kock, all the visitors’ main bowlers made significant strikes to limit the defending World T20 champions to 143-9 despite a typically flamboyant 52 from opening batsman Evin Lewis.

Fast bowler Lungi Ngidi, who endured a hammering earlier in the series, bounced back with three wickets. Fellow pacer Kagiso Rabada, and seam bowling all-rounder Wiaan Mulder, playing in place of injured speedster Anrich Nortje, took two wickets each. However, the best bowling effort came from Tabraiz Shamsi, who conceded just 11 runs through his four overs in claiming the wicket of West Indies talisman Chris Gayle. The left-arm china man specialist was the clear choice as CG Insurance Man-of-the Series taking seven wickets across the five matches at the outstanding economy rate of four runs per over.

Earlier, Markram’s highest T20 International score and another half-century from the consistent de Kock set the pace for South Africa. Markram’s 70 off 48 balls with four sixes and three fours came as he and de Kock (60 off 42 balls with two sixes and four fours) put on 128 for the second wicket after Bavuma fell without scoring in the first over bowled by Fidel Edwards.

Despite the excellent platform provided by Markram and de Kock though, the innings lost momentum over the final ten overs, especially when Edwards separated the pair by having de Kock caught by Andre Russell at long-on. Edwards’ figures of 2-19 were the best for the West Indies bowlers.

West Indies will now travel to Saint Lucia where they will face Australia in a five-match CG Insurance T20I Series at the Daren Sammy Cricket Ground, starting Friday.