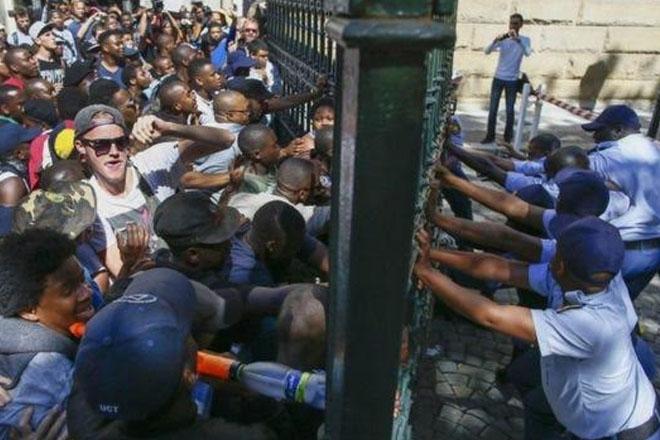 (BBC) – South African students who were marching to parliament in a protest over a rise in student fees have clashed with police.

Police fired stun grenades as the protesters were trying to force their way into the parliamentary complex.

Proposed tuition fee hikes of between 10% and 12% have sparked protests at universities across the country.

Inside parliament in Cape Town a budget speech by Finance Minister Nhlanhla Nene was temporarily halted as members of the opposition Economic Freedom Fighters chanted “Fees must fall” – a slogan borrowed from the students.

Student bodies have rejected a government offer to cap tuition fee increases at 6% for 2016, and earlier threatened to close all the country’s universities as protests over tuition fees spread.

At least 10 institutions have so far been affected with some closing until the situation is resolved.

Both #NationalShutDown and #FeesMustFall continue to trend on social media in South Africa.

BBC correspondents say the protests seem to be intensifying as students refuse to back down, and there is a heavy police presence at most institutions.

Student politics have been part of this country’s political fibre for many years.

In the apartheid era, students took to the streets to protest against being taught in Afrikaans, one of the main languages spoken by the white minority.

It seems that spirit of defiance has returned, but in this case it is in the born-free generation, a term used for those born after the advent of democracy.

They are calling for free education for the poor saying this was promised by the African National Congress government when it took power in 1994.

But the government says that it cannot afford this.

In Cape Town white students are said to be forming human shields between black students and the police.

They say while some of them can afford university fees, they want to support the majority of black South African families who cannot.

Amid the demonstrations, it seems that streaks of the rainbow nation are uniting.

Students say the proposed fee hike amounts to discrimination in a country where the average income of black families is far less than that of white families.