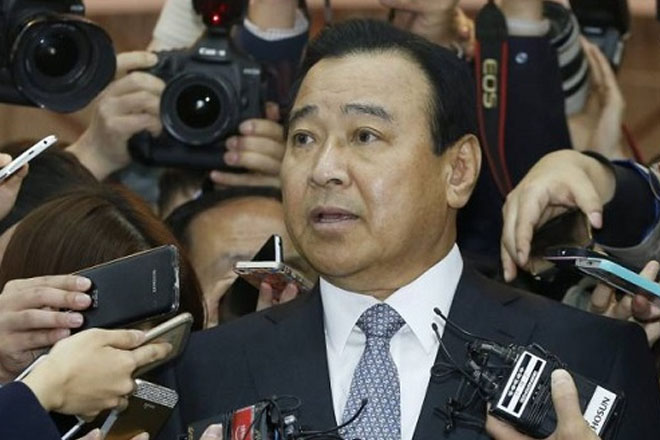 Park is currently on a trip to Latin America and a presidential spokeswoman said she would formally decide on whether to accept the resignation when she returned next week.

“I find it regrettable. I also feel sympathy for the agony of the prime minister,” the president said in a written statement from Lima after being informed of Lee’s offer.

Lee, who has only been in the job for two months, tendered his resignation late Monday after the main Opposition party said it would seek his impeachment.

Lee’s office said he had reported to work Tuesday morning.

The prime minister is a largely symbolic post in South Korea, where power is concentrated in the executive.

But under Park, it has proved to be a job that is both difficult to secure and equally tough to hold on to.

The president’s first-ever nominee withdrew after allegations about his past, and her initial prime minister was Chung Hong-Won, who then resigned after the April 2014 Sewol ferry disaster.

Two successive Park nominees to replace Chung withdrew their candidacies — again because of allegations of past wrongdoing — and the job finally went to Lee, who now looks almost certain to step down.

The current scandal was triggered by the suicide earlier this month of Sung Wan-Jong, the former head of a bankrupt construction company.

In his pocket, investigators found a note that listed the names of eight people — including Lee and presidential chief of staff Lee Byung-Kee — alongside numbers that were alleged to indicate bribery sums.

The suicide came as Sung was about to be questioned by prosecutors over allegations that he created a slush fund with embezzled company money to bribe politicians and government officials.

The president has vowed to punish “anyone” found involved in corruption.

Lee has repeatedly denied all the allegations and said he would “lay down” his life if prosecutors find any evidence that he took bribes.

But the pressure on him to step down has been building, especially following the Opposition impeachment threat.

The affair is a fresh blow to president Park, whose popularity ratings were only just beginning to recover from the hit they took after the Sewol disaster.