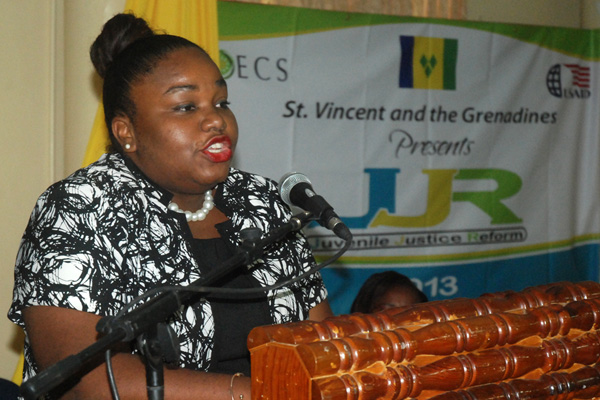 Specific guidelines for media called for in juvenile justice matters

Kingstown, St. Vincent and the Grenadines – Vincentian Magistrate Rechenne Browne-Mathias after presenting the Child Justice Bill to the second working session of the National Juvenile Justice Reform Project Training Conference yesterday afternoon, in a concise manner, then dealt with a number of questions and issues articulated by the participants.

One participant spoke of her confusion on the various ages of legality. According to her, the age for sexual consent is 15, married 16, and voting is 18. “How soon it may be before there is another adjustment in the various laws?”

In responding, Magistrate Browne-Mathias said, “the Bill seeks to foster inter-ministerial approach, guide us regarding child offenders; how the issues are addressed making sure rights are not infringed.”

Another participant wanted to know if there is anything in the proposed Child Justice Bill, in relation to a criminal act being committed on a child.

The answer to that is the Criminal Code is formulated to deal with these issues.

Jeannie Ollivierre of Marion House noted the presence of probation officers and inter-ministerial personnel d on the Committee. Nevertheless, was concerned as to where does the NGO fit in the legislation?

The Vincentian Magistrate answered, “We have in the Bill, diversion options in Clause 57-70 which speaks to a variety of options that capture NGOs.”

The professionalism of and training for the child justice committee members is paramount, but is there going to be specific training for social workers pertaining to the Juvenile Justice Project?

To which Magistrate Rechenne Browne-Mathias answered: “yes there will be.”

The work of the media was brought into the spotlight, with the issue of journalists interviewing children when it comes to matters before the court. The speaker suggested that the Bill be more specific in that the Bill makes clear the adults who should be present when the child is question by anyone.

In addition, no journalist should question any child on any matter, and a workshop for all media practitioners should be part of the Project, to which Magistrate Rechenne Browne-Mathias responded that she was in total agreement “with you on your suggestions and your point.”

Kimberly Cambridge then asked where girls in conflict with the law go. The answer was that both boys and girls are dealt with under the same law, and that there are appropriate facilities to take care of them.