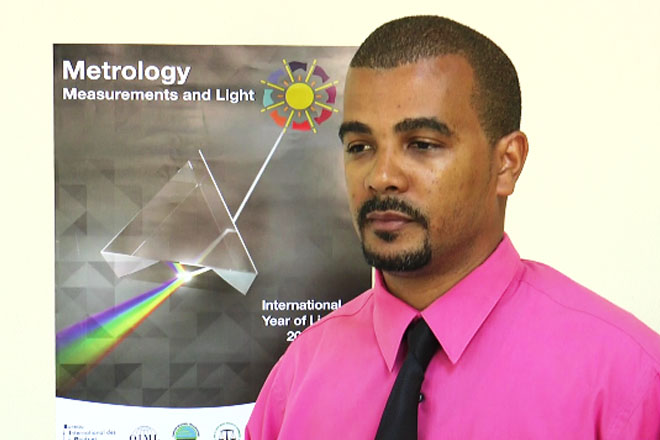 (ZIZ News) — 20th May is World Metrology Day and the St. Kitts and Nevis Bureau of Standards [SKNBS] is spreading the word about its work and impact on the Nation.

This year’s theme for World Metrology Day was ‘Measurements and Light’. It and was chosen to align with the UNESCO International Year of Light and Light-based technologies.

Leading up to the observance, ZIZ News caught up with I-Ronn Audain who is the Head Metrologist at the SKNBS.

Audain described the work of the Bureau as very important in ensuring consumers are protected and get the services they pay for.

Audain also gave examples of how Metrology is applied in St. Kitts and Nevis.

“You could see the importance of Metrology in commerce, in trade. Persons want to know once they trade goods from one country to the next, whatever measurements they use in the transactions are actually accurate and are the same whether you take the measurements in St. Kitts or you take the measurements in England, they are the same. Also, a very important aspect is health and safety. For example, now these days, there are major operations happening where persons need to extract a certain amount of fluids coming into the body and put a certain amount back into the body and these measurements have to be precise or they could mean the difference between life and death,” Audain explained.

Our cameras accompanied the Head Metrologist to the Delta Gas Station in Buckley’s and observed the verification of fuel pumps there.

He said, “Today, we are conducting the verification of fuel pumps at Delta Gas Station. Our process is based on an internationally recognised standard for legal Metrology. It’s very simple. The aim of this exercise is to make sure that the consumer, when they pay for a gallon of gas, they’re actually getting a gallon of gas,” he said.

The visiting Metrologist asked the attendant at the gas station to pump five gallons of gas and place it into a prover. He said in cases where the amount is proven to be inaccurate, the Metrologist will ask the attendant to make the relevant adjustment then a retest is done.

The next stop was the check-in area of the Robert L. Bradshaw International Airport. There, Audain explained the scale verification process.

“If the scales are not calibrated properly and the plane becomes overloaded or overweight then the plane could end up crashing so it is empirical that all scales at all airports be calibrated,” he said.

Metrology is the study of measurements. The St. Kitts and Nevis Bureau of Standards was established in March 1999.